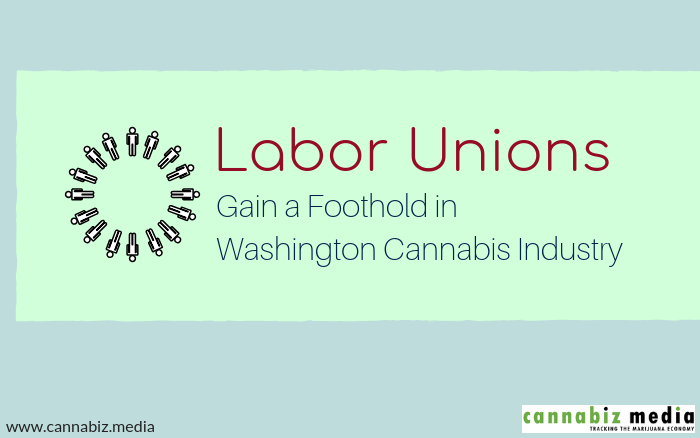 The cannabis industry is growing and labor unions want to get in. Last month, the United Food and Commercial Workers union and cannabis retailer Have a Heart signed the state’s first cannabis collective bargaining agreement. In other words, the road is now paved for additional unions to organize workers in the state.

As part of the agreement, Have a Heart’s employees are guaranteed above-average wages for the industry, fair treatment, and a variety of benefits, including comprehensive health coverage. The Seattle Times reported that Ryan Kunkel, the CEO of Have a Heart, believes the union reaffirms the company’s goal to create a “safe and empowering workplace.”

Labor unions have been losing members for years. Between 1983 and 2018, the number of union workers dropped in half – from 20.1% of the U.S. workforce in 1983 to just 10.7% today. For unions, the cannabis industry represents a significant opportunity.

It’s important to note that Washington isn’t the first state where cannabis workers have organized. Unions have already organized cannabis workers in multiple states, including California, New Mexico, New York, Minnesota, and more. Unions like the United Farm Workers, United Food and Commercial Workers, and Teamsters are actively engaging with cannabis workers across the country to organize them.

However, the story of Have a Heart isn’t the same as many other stories you’ll hear about cannabis workers organizing into unions. Many employers are against them, and that’s because the reality of unions includes both advantages and disadvantages.

For employers, their costs might become more predictable after workers organize, but those costs will go up (remember, they’ll be paying higher wages and providing more comprehensive benefits). If the company’s costs go up, it’s very likely that those costs will trickle down to consumers in the form of higher prices. As a result, the business could become less profitable and less competitive.

For the cannabis industry, it’s too soon to quantify the impact of unions on a wide scale. So far, we know that the power of unions can help on the political front. In addition, unions can add a sense of legitimacy to cannabis businesses, which could help those businesses in other areas. The question is will the advantages outweigh the disadvantages for cannabis businesses and the industry overall. Only time will tell.

What’s Next for Unions and the Cannabis Industry?

Currently, the United Food and Commercial Workers union claims to have thousands of workers from the marijuana industry in union contracts. In addition, the union claims tens of thousands of workers have claimed representation by the union but haven’t completed their contracts yet with a formal vote. If those numbers are accurate and all of those workers organize, we could see a seismic shift in the cannabis industry in the near future.

One thing is certain, the labor unions won’t stop trying to expand their footprints in the cannabis industry.