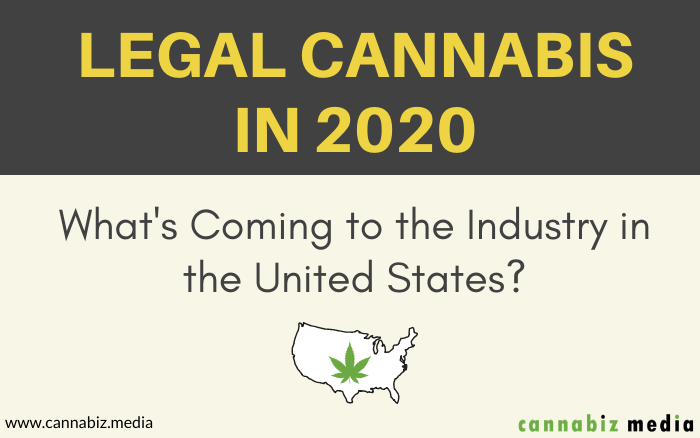 Legal Cannabis in 2020 – What’s Coming to the Industry in the United States?

The cannabis industry in 2019 faced a lot of changes, and while change won’t come to a grinding halt in 2020, particularly since it’s a Presidential election year, the bigger story in the coming 12 months could be about industry growth.

Two of the biggest federal cannabis stories to come out of 2019 happened during the fourth quarter when two important pieces of legislation that could shape the industry’s future took steps closer to becoming laws – the Secure and Fair Enforcement Banking Act (the SAFE Banking Act) and the Marijuana Opportunity Reinvestment and Expungement Act (the MORE Act).

In September, the SAFE Banking Act was passed by the U.S. House of Representatives. This was the first piece of cannabis-related legislation to make it all the way through Congress, and if it’s passed by the U.S. Senate and signed into law, it will open up banking opportunities to the cannabis industry that have stifled its growth for so many years.

In November, the MORE Act made it through the House Judiciary Committee and moved to the full U.S. House of Representatives. This bill has been called the most comprehensive cannabis reform bill to ever be introduced in Congress, and if it is ultimately passed, it would decriminalize marijuana at the federal level.

Will one or both of these bills become laws in 2020? It’s far from guaranteed. Just this week, news broke that the U.S. Senate removed cannabis amendments from multiple spending bills passed by the House. Specifically, amendments were removed that would:

One step forward and two steps back seems to be the norm for the cannabis industry where federal legislation is concerned.

Some industry insiders speculate that 18 states could legalize cannabis for medical or adult use in 2020 either through legislation or ballot initiatives. Likely contenders for adult-use legalization include Florida, Vermont, and several states in the Northeast – New York, New Jersey, Connecticut, Pennsylvania, and Rhode Island.

In October 2019, governors and top legislators from New York, New Jersey, Connecticut, Pennsylvania, and Rhode Island came together at the Regional Cannabis Regulation and Vaping Summit to discuss unified cannabis legalization across the northeastern states of the U.S. With top lawmakers supporting adult-use legalization in each of these states and an interest in coordinating efforts, it would seem that one or more of these states will legalize marijuana in 2020. Already, New Jersey lawmakers approved a resolution that will put a referendum to legalize adult-use marijuana on the state’s 2020 ballot.

In addition, 2020 will be a learning year for the industry, particularly in Illinois where adult-use sales begin on January 1. Illinois is the first state to legalize adult-use cannabis and sales by legislation rather than a ballot initiative, and the 10 allowed licensed dispensaries will begin selling recreational marijuana products in just a couple of weeks. You can bet other states will be watching closely as they consider their own cannabis-related legislation initiatives.

Pundits predict that 2020 will be a year of consolidation in the cannabis industry. Already, in 2019, we saw a fair amount of mergers and acquisitions, and this activity will continue in the coming year as established companies acquire smaller companies that face capital problems.

Cash flow and capital are hot topics for cannabis industry investors heading into 2020, particularly as well-known cannabis companies have released disappointing earnings results in recent months. This could result in not just mergers and acquisitions but also in bankruptcies and industry exits. For companies that are successful in managing positive cash flows and raising capital, there could be some attractive acquisition targets available at significant discounts.

Cannabis-related research has been limited while the plant is illegal at the federal level, but research is desperately needed. In November, the Drug Enforcement Agency (DEA) announced its plans to grow 3.2 million grams of cannabis for research during 2020, which is a 30% increase over what was grown in 2019 for research.

While this is good news and bodes well for funding additional research studies in 2020, there are still obstacles to conducting that research. Currently, there is only one cultivation facility that is federally authorized to grow cannabis (at the University of Mississippi). While the DEA has proclaimed for the past three years that more cultivation options would be added, it hasn’t happened yet.

Furthermore, the cannabis grown for federal research purposes contains a significantly smaller amount of THC than what is contained in commercially available marijuana products that patients and consumers buy at licensed dispensaries and retailers. Therefore, the research results won’t provide adequate results.

It remains to be seen if these hurdles can be overcome in the next 12 months.

Key Takeaways about Legal Cannabis in 2020 in the U.S.

The cannabis industry is growing. Public opinion is overwhelmingly pro-marijuana and more than two-thirds of American adults support adult-use legalization. The coming year will continue to bring change to the cannabis industry – something industry insiders have certainly gotten used to by now. However, 2020 will also be marked by growth.

It’s an exciting time to be part of the industry, and Cannabiz Media will continue to track all license activity in the Cannabiz Media License Database.