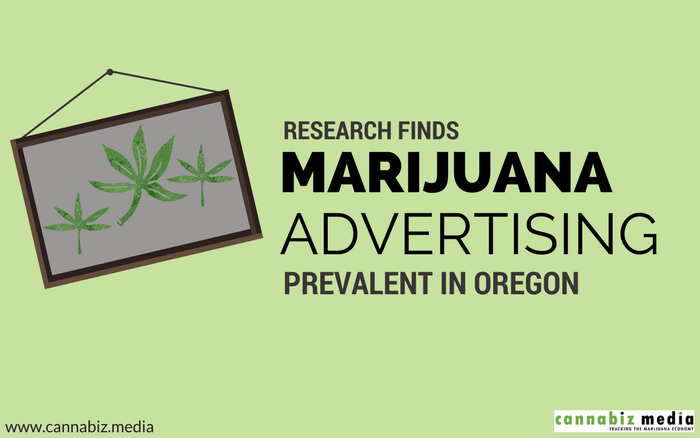 While more than half of Americans can access either medical or recreational marijuana (or both) in their home states, that doesn’t mean it’s easy for marijuana companies to spread the word about their products and services. However, cannabis license holders in Oregon have demonstrated that advertising is not only possible but also effective.

Back in 2017, a study published in the American Journal of Public Health (funded by the National Institute on Drug Abuse) found that marijuana advertising had become commonplace in Oregon.

The study involved an online survey of 4,001 adults living in Oregon and tracked their exposure to marijuana ads between 2015 and 2016 after marijuana had been legalized for retail sales in the state. More than one in two respondents to the survey (54.8%) reported that they had seen a marijuana ad within the prior month. Primarily, they saw advertising on storefronts (74.5%), on sides of streets (66.5%), and on billboards (55.8%).

Fast forward to 2019 and cannabis businesses continue to face many of the same advertising challenges based on rules put in place by state agencies to protect consumers.

As the Oregon Liquor Control Commission (OLCC) explained in an educational bulletin to existing and prospective recreational marijuana licensees, “OLCC Recreational Marijuana rules are expressed as restrictions on advertising – what is not allowed.”

With that in mind, it’s important to understand what the OLCC considers to be advertising. In the state’s recreational marijuana rules, the OLCC defines advertising as follows:

That’s a very broad definition, Since the OLCC warns license holders that failure to adhere to their rules could be deemed a “compliance violation affecting your ability to work or operate your business,” cannabis license holders in Oregon need to consider these advertising rules under a similarly broad lens.

In comparison to many other states’ rules related to cannabis advertising, Oregon’s are actually quite simple, albeit broadly written. Sections 845-025-8000 to 845-025-8080 of the OLCC Division 25 Recreational Marijuana rules cover advertising restrictions for cannabis license holders. According to that document, marijuana advertising may not:

For cannabis license holders in Oregon, these rules certainly add obstacles to cannabis brand promotion, but they’re not insurmountable. However, that’s not the case in every state. Furthermore, external obstacles, such as social media advertising rules, email marketing rules, broadcast television and radio advertising rules, and so on add more challenges that cannabis businesses have to overcome in order to promote their products and services.

Marijuana advertising laws vary by state and often by municipality. While Oregon’s laws allow marijuana retailers to display signs, billboards, and more to promote their products, other states have much stricter rules. For example, some states require that all marketing materials and advertisements receive preapproval from specific governing bodies before they can be used. Other states restrict everything from signage to verbiage in marketing and advertising. In Connecticut, medical marijuana dispensaries have to follow 16 pages of advertising and marketing guidelines!

However, all hope is not lost for marijuana businesses. It’s extremely difficult – if not impossible – for cannabis businesses to advertise through Google AdWords and Facebook Ads, but that doesn’t mean there are no other options. It just means marketers need to reach a bit deeper into their bags of tactics, recall all of those traditional marketing opportunities they used 10 years ago, and get creative.

So what’s a marijuana brand to do? Here are some opportunities to consider:

For digital marketing, programmatic ad buying can work very well, but it does need to be managed with human supervision to ensure your company doesn’t get in trouble. For example, age verification is always a concern. Automation can work, but proceed with caution!

Can’t do radio advertising in your state? Consider advertising on podcasts. This is a strategy that MedMen, one of the largest cannabis brands in California and across the country, has done with great success.

Many states and the Federal Communications Commission (FCC) won’t allow cannabis ads on broadcast radio, but satellite radio isn’t considered to be broadcast as far as the FCC is concerned. That means you could have success placing ads in targeted satellite radio programs.

Outreach can be extremely effective – not just traditional media outreach but also online publisher outreach. What sites publish content related to your business? Find them and pitch your story ideas. Even if a traditional media company won’t write a story about your brand, you might be able to write an article and get it published on an influential blog.

The power of email marketing comes from your list of subscribers – a list that you have complete control over. Use it to build relationships with consumers that lead to sales and word-of-mouth marketing. Just be sure to choose an email marketing tool that allows you to send messages related to marijuana and always follow email marketing best practices.

Be present at industry events. It’s that simple. The cannabis industry is growing quickly, but it’s still a fairly new industry. Consumers are still learning about marijuana products, and they attend events to become better educated. Attend industry events and speak with consumers and the press.

You can also hold your own events. These events don’t have to be huge conferences. Hold local events to educate your community. This type of brand building not only helps drives sales today but also helps build your brand reputation, which is essential as the market becomes more competitive.

In-store experiential marketing offers a number of opportunities to marijuana businesses. For example, set up an iPad in your store to capture customers’ email addresses (to build your email marketing list). You can even include a survey to learn about your customers’ preferences to better target them in your future email campaigns.

Learn from the Past to Prepare for the Future

There are many marijuana marketing challenges, but these obstacles don’t create a completely uncharted environment for marijuana businesses. The alcohol, pharmaceutical, and tobacco industries are filled with similar obstacles.

In other words, the marijuana industry might still be fairly new, but retailers and dispensaries do have other industries and histories that they can look to for guidance in terms of creative marketing. In fact, you can find some ideas to overcome marijuana advertising challenges here.

As the marijuana industry continues to grow, particularly as recreational marijuana grows, competition will become tougher. When supply outweighs demand (as we’ve seen in Oregon), advertising and marketing become so much more important. The key for every marijuana-related business is to prepare a comprehensive, long-term marketing and advertising strategy now.

Even if things aren’t overly competitive today and advertising doesn’t seem like a necessary investment this year, it will become highly competitive and necessary in the near future. The winning businesses will be the ones that are well prepared.