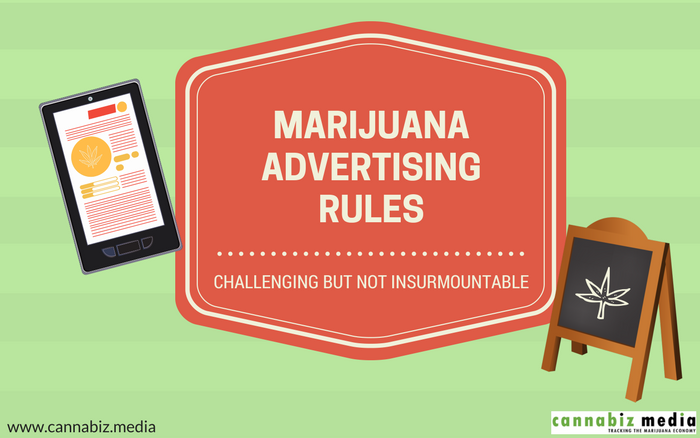 Marijuana-related businesses have a problem. It’s extremely challenging to market and advertise their products and services because marijuana is still considered a Schedule 1 drug. In other words, advertising products and services related to a substance that is illegal at the federal level poses unique obstacles that no other industry faces.

As Jean-Paul Jassy of Cannabis Business Executive explains, “It is unlawful to use a ‘communication facility’ (i.e., mail, telephone, wire, radio, and all other means of communications) to facilitate a felony.” Based on the Controlled Substances Act, federal laws make it very clear that marijuana businesses cannot use mail, phone, radio, television, and so on to promote their products and services. Why? Because federal law sees using these communication vehicles as ways to sell an illegal drug.

It’s important to point out that the law gets a bit confusing as it relates to advertising though, because advertising doesn’t have to directly try to facilitate a transaction. For example, a dispensary might mail educational materials or buy ad time on a radio station to provide an educational message (of course, with its name and location included at the end of the ad for indirect promotional purposes). It’s a gray area of the law though with no precedent set, so marijuana businesses have to be extremely careful.

Federal law always trumps state law in lawsuits that can be tried at the federal level, so regardless of a marijuana business’ state laws, it needs to be aware of and follow applicable federal laws. This is where an attorney who specializes in this type of work is so useful!

The U.S. Postal Service is an entity of the federal government and abides by federal law, which means it’s illegal to mail materials promoting an illegal substance. These mailings would be considered “nonmailable.” However, in 2015, the U.S. Postal Service clarified its stance on nonmailables saying its employees would notify the sender when nonmailables are felonious, but if the mailer insists on putting the materials into the mail, employees would do so. The employees would then need to file a report to their local inspection service, and the matter would be turned over to the responsible law enforcement agency if appropriate. In other words, marijuana businesses can mail properly prepared materials to promote their products and services, but they do run the risk of being contacted by law enforcement officials once those materials go in the mail.

Bottom-line, since marijuana is still a Schedule 1 drug, federal laws make it very difficult for marijuana businesses to pursue many traditional advertising opportunities that other industries use every day to build their brands, attract new customers, and grow.

In addition to federal laws, marijuana businesses have to abide by specific marijuana advertising laws established within their states. Some of these laws are fairly universal, meaning they exist in some form in most or all states where medical and/or recreational marijuana are available. Many of these laws were discussed in Cannabiz Media’s Marijuana Licensing Reference Guide: 2017 Edition.

For example, marijuana businesses can’t market their products and services to or near children. Some states require that all advertising and marketing materials be approved by the state’s marijuana governing agency before they’re used, and many other states have very specific signage rules. Furthermore, a number of states have detailed rules about the size, type, and color of fonts used in ads and marketing materials. There are even some extreme rules. For instance, in Delaware, no advertising is allowed except in directories and phone books, and in Alaska, giveaway coupons are not allowed.

How to Overcome Marijuana Advertising Challenges

As you can see, federal laws are very restrictive, and state rules can get extremely specific and complex in terms of detail. All hope isn’t lost for marijuana advertising though. Here are some creative advertising ideas to consider:

Create branded merchandise (if your state allows it) and advertise those items rather than your marijuana products and services. Developing related products and services is a core step in a marijuana business’ trademark strategy to increase its value, so you’ll get short-term benefits in the form of increasing brand awareness and sales as well as long-term benefits in terms of building brand equity.

There are more options to placing radio ads than on the biggest stations in your geographic area. Get in touch with smaller, niche stations. Furthermore, if a station won’t play an ad for a marijuana business, they might allow the business to sponsor a segment where the business name and location (and perhaps a brief message) are stated on air. In addition, look for other audio advertising opportunities. For example, find podcasts that your target audience listens to and contact them about advertising placements.

While television stations that have licenses with the Federal Communications Commission are unlikely to show ads promoting marijuana for fear of losing their licenses, many cable stations don’t have that fear (and they’re more affordable). Look for stations that cater to your local audience.

An advertorial (also called native advertising or sponsored content) is an article that you write (or pay someone to write for you) and publish on a website (or in a publication such as a magazine or newspaper). You pay the website a placement fee, and in return, your article is published with a link to the web page of your choice. Advertorials are typically not self-promotional and per the Code of Federal Regulations, they must be clearly identified as sponsored content.

Rather than using an ad platform or network such as Facebook ads or Google AdWords, you can contact websites and pay for direct ad placements. Yes, this can be time-consuming, but it’s likely your ads won’t be approved by larger platforms and networks. Going directly to websites to close ad placement deals is often a more effective strategy.

Video content is very popular and highly shareable, so it’s a great place to advertise. You can create your own video ads and display them through direct website placements (as discussed above), or you can approach video publishers and ask if you can sponsor their videos. For example, a popular YouTuber whose audience matches your target consumer might be willing to mention a marijuana business at the beginning of his or her video.

Of course, all of these advertising opportunities are just a small part of a fully integrated marketing plan. Content marketing, social media marketing, experiential marketing, event marketing, and more provide even more ways for you to promote marijuana products and services to consumers in legal ways.