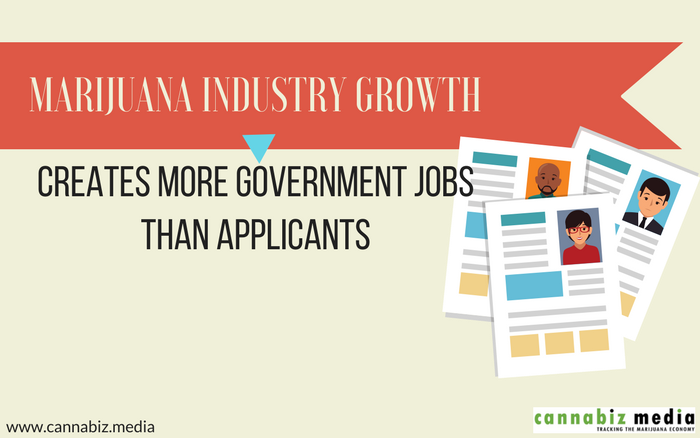 The job growth data might surprise you. Here are some key statistics from studies conducted in early 2018 and in 2017 by ZipRecruiter and New Frontier Data that paint an interesting picture:

Overall, ZipRecruiter found that the most marijuana industry jobs were posted in California, Colorado, and Washington in 2017. Specifically, the 10 Metropolitan Statistical Areas (MSAs) with the highest job growth in marijuana jobs during 2017 were:

Interestingly, not only are jobs opening at marijuana-related businesses (including businesses that touch the plant and ancillary businesses), but also, many states are adding hundreds or thousands of government jobs to handle the various tasks required to support the highly-regulated industry.

In California, hundreds of new government jobs will be available by 2019 and thousands more are expected to open for local governments. That’s a big jump from the 11 full-time employees who worked for California’s Bureau of Cannabis control in January 2017. While that number doubled in the following nine months, it grew to over 100 workers by February 2018 – shortly after recreational marijuana became legal in the state. Within just 11 more months, hundreds of additional jobs will be added at the state level.

These jobs will focus on issuing business licenses, overseeing environmental conditions, and enforcing the state’s marijuana laws. License examiners, engineers, scientists, and more will be needed to keep the country’s largest legal marijuana market running. These government employees will work in the agency’s main office as well as in satellite offices that will be located across the state.

Labor Shortages at the State Level

The problem is many of these jobs require specialized skills, so finding people to fill them isn’t always easy. That’s a growing concern in California where the Bureau of Cannabis Control started posting job openings on Facebook back in 2017 to attract more applicants. Furthermore, many state governments waited to add staff until problems arose. In some cases, these problems became very big.

For example, in Florida, patients were forced to wait up to three months to receive their state-issued marijuana ID cards last year. The process to issue ID cards once an application was submitted to Florida’s Office of Medical Marijuana Use should have been just 30 days. However, the majority of applicants were waiting 40 to 50 days to receive their cards because the office was understaffed. To solve the problem, the Office of Medical Marijuana Use hired 28 new employees. Last month, Florida lawmakers approved an additional $13.3 million in funding for the state office regulating marijuana.

In Alaska, understaffing created delays for marijuana businesses that were waiting to get licenses in 2017. The Alaska Alcohol & Marijuana Control Office began processing business applications for the state’s recreational marijuana industry over a year and a half earlier, but issuing licenses took far longer than expected. The office had to seek approval from the state’s House budget panel in February 2017 for approval to hire three new employees – an administrative assistant and two additional licensing examiners who would help to handle marijuana license applications.

In Arkansas, application processing delays mean patients are unlikely to legally access medical marijuana until 2019 – a full two years after voters approved medical marijuana through a ballot measure. One of the problems was the large volume of marijuana license applications that were submitted by cultivators and dispensaries.

Hundreds of applications totaling over 300,000 pages were submitted, and the Medical Marijuana Commission – made up of five political appointees who are tasked with scoring each application using the state’s competition process – needed a significant amount of time to complete their tasks. Court rulings over the licensing process delayed things even more, but finally, five cultivators were awarded permits in July 2018.

Labor shortages at the state level are already negatively affecting state marijuana programs as we’ve seen in Florida, Alaska, and Arkansas. The problems can significantly slow down patient adoption and might even create insurmountable barriers for some patients. In other words, labor shortages could keep some people out of their states’ marijuana programs entirely.

In addition, businesses that should have the opportunity to compete in the market aren’t able to do so in a timely manner in some states simply because labor shortages keep them from receiving their licenses.

Ultimately, patients, businesses, and even the government, which loses out on tax revenue, suffer when government labor shortages slow down business license and patient ID card processing as well as hinder growth of the marijuana economy.

Who Will Win Licenses in Georgia?

Opportunities and Limitations for Microbusiness Licensing