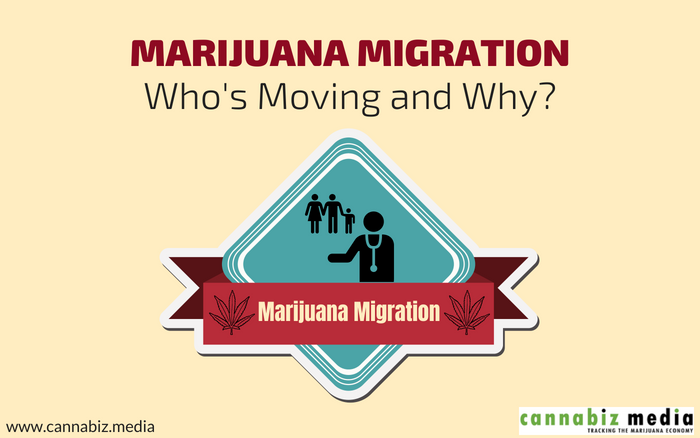 Cannabis Migration – Who’s Moving and Why?

The cannabis migration first gained notoriety in 2013 when legalization came closer to a reality in Colorado. Fast forward to 2020, and it’s still happening. The difference today is that many people are moving to cannabis-friendly states for a wider variety of reasons then they did seven years ago.

Let’s take a look at who is moving, why they’re moving, and where they’re going.

Who are the Cannabis Migrants?

With medical marijuana now legal in more than half of the states across the country, migration by patients has slowed. However, it’s not over yet.

Parents seeking help for their children’s illnesses and chronic conditions have also been moving to states that allow medical cannabis for minors. Colorado was one of the first states to experience a significant influx of residents who came specifically to access medical marijuana for their children.

Parents who made the move to Colorado referred to themselves as marijuana refugees back in 2013 as they left jobs and family members behind in order to get the medical cannabis their children needed.

At the same time, dispensary owners reported that 50% or more of their customers were senior citizens.

Farmers who cultivate cannabis are also moving to find better growing and business conditions. For instance, a six-year drought in California motivated many cannabis farmers to move their operations further north within the last several years.

Many of these California marijuana farmers headed to southern Oregon at the time where growing conditions are better despite the fact that competition is also higher for cannabis farmers in the southern Oregon marketplace.

The cannabis gold rush brought a promise of new jobs to job seekers across the country. As new states launched cannabis programs, people who wanted to get into the industry flocked to those states.

Regardless of whether or not all of those people found work in the marijuana industry, their migration certainly did have an effect on populations and local economies.

It’s not unusual today for cannabis license holders and ancillary businesses to recruit executives and professionals from other industries.

In recent years, executives from Apple, Facebook, and across Corporate America have made the move to the cannabis industry, and for many of them, that meant joining the cannabis migration.

As more states legalize adult-use and medical cannabis, career opportunities increase. The next generation of workers sees this happening and many of them are actively looking for ways to gain the knowledge they need to land jobs in the future.

There are already a variety of colleges offering cannabis courses and degree programs, and students are moving to states where these colleges are located to take advantage of new educational opportunities.

Many entrepreneurs seeking a chance to stake their claims in the cannabis market have made the move to join the industry in states where marijuana is legal for medical and/or adult-use. Today, those entrepreneurs and business owners continue to migrate as necessary to follow the opportunities.

Migration is common among both new market entrants and entrepreneurs who have been working in the industry already. For example, many cannabis-related businesses have closed up shop in their home states when a different state passed new and more desirable medical or recreational marijuana laws. Making the move was worth it when these business owners weighed the costs against the risks of operating in states where their operations could be considered illegal.

Some people move to states that have approved recreational cannabis simply because they want to be able to access marijuana products any time they want.

In Park County, Colorado, an influx of off-the-grid dwellers (or nearly off-the-grid) settled in recreational vehicles and tents, and by 2016, 287 marginal dwellings were counted in a single 50-mile loop of land.

Why is the Cannabis Migration Happening?

There isn’t a single catalyst to the cannabis migration. Instead, people are moving for a variety of reasons, but the four key reasons motivating the vast majority of marijuana migrants are freedom, medical needs, quality, and jobs and business opportunities.

For many people who move to cannabis-friendly states, the purpose of making the move is simply to have the freedom to use marijuana products whenever they want.

A large number of cannabis migrants have uprooted their lives and families in order to access marijuana for medicinal purposes.

Workers and entrepreneurs who want to generate an income from the cannabis market are highly likely to move to cannabis-friendly states if their own state has yet to legalize medical or recreational marijuana or if their own state’s marijuana regulations are overly strict.

Where is the Cannabis Migration Taking People?

For example, in Colorado, a statistically significant increase in migration to the state began in 2011 according to The Pot Rush: Is Legalized Marijuana a Positive Local Amenity research study by Diego Zambiasi and Steven Stillman. Between 2005 and 2009, an average of 187,600 people moved to Colorado each year to access medical cannabis. Between 2010 and 2013, the number of people who moved to Colorado increased by 20,760 per year (an 11% increase).

After full legalization of cannabis in 2014, the number of people who moved to Colorado increased by 15,470 people per year (an additional 8.2%). As of 2015, marijuana legalization had increased Colorado’s overall population by 3.2%.

Will the Cannabis Migration Continue?

As long as cannabis is not legal in all 50 states, it’s highly likely the cannabis migration will continue as people seek medical, educational, and career opportunities that they can’t find in their home states. However, the migration will slow as more states legalize both medical marijuana and adult-use marijuana in the future.

Bottom-line, until the United States has an open market for people seeking freedom, help for their medical needs, quality, education, and jobs related to cannabis, migration will continue.