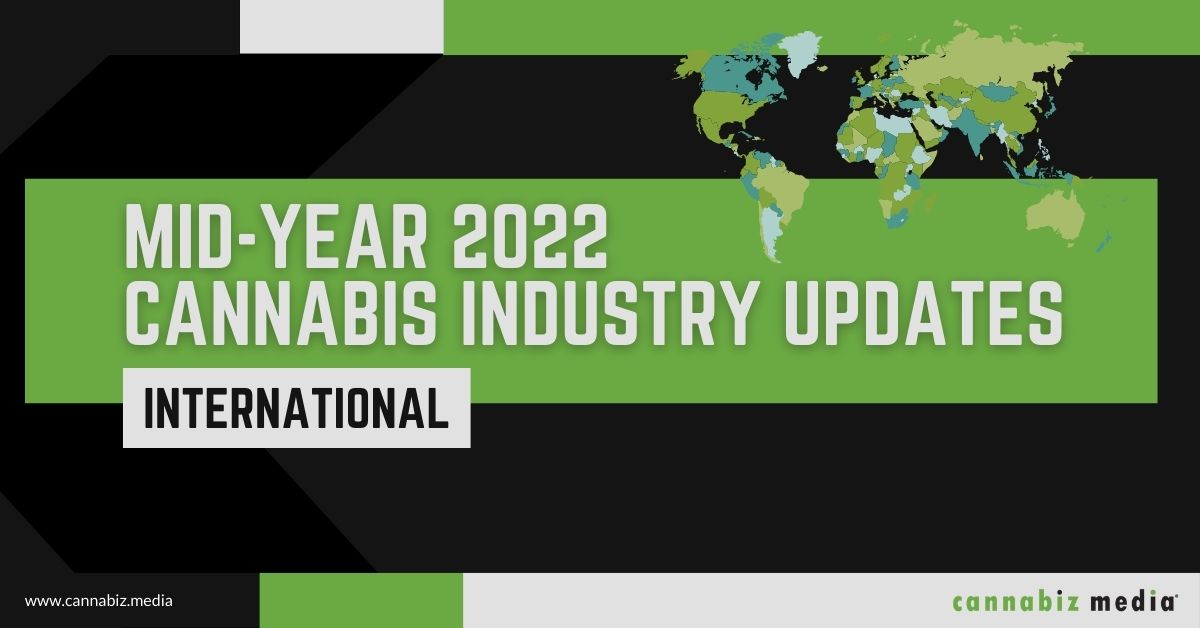 One of the biggest stories in 2022 has been the Russian invasion of Ukraine, which significantly impacted the global supply chain. The cannabis industry has not been immune to these supply chain delays and shortages. Cannabis businesses are also facing higher prices thanks to the domino effect the invasion has had on the global economy.

Despite the challenges, progress has been made in a number of international cannabis markets. For example, European officials from Germany, Luxembourg, Malta, and The Netherlands met in July to discuss adult-use cannabis reforms and find ways to work together to create policies.

Let’s take a look at some of the news about specific international cannabis markets that has broken during the first seven months of 2022.

As adult-use cannabis markets start to mature in Canada, problems are evolving. Some widespread concerns during the first seven months of 2022 include retail store oversaturation, unpaid federal excise duties, the need for retailers to increasingly discount products, and unpaid regulatory fees. In June, the Canadian government announced a new federal cannabis strategy table that would bring industry leaders and government officials together to discuss these problems and more.

In Ontario, a significant problem has been the province’s single, government-owned wholesaler, which is being called a wholesale monopoly. Shipping delays from the wholesaler and suspended deliveries after a cyberattack have left thousands of retailers unable to place orders. It took a week for shipments to resume after the cyberattack, which meant retailers had empty shelves for days. This single-point-of-failure model prompted the Ontario Chamber of Commerce to issue a call for reform in August.

Some positive news came out of Ontario’s cannabis market during the first half of 2022. In March, retail delivery and curbside pickup became permanent, and the Alcohol and Gaming Commission of Ontario announced that cannabis retailers would be allowed to contract with manufacturers to create white-label and house-brand cannabis products.

In British Columbia, where legal cannabis sales flattened earlier this year, consumers were happy to hear that privately-owned cannabis stores would be allowed to deliver non-medical cannabis to consumers through delivery providers and regular mail. In addition, the British Columbia government announced in April that it was considering allowing adult-use cannabis consumption spaces, which could boost tourism and create more tourism and hospitality jobs.

The 27 countries in the European Union represent a wide variety of cannabis laws and programs. For example, Germany is moving forward with plans to launch the first national adult-use cannabis program in Europe, but regulations have yet to be developed. Germany’s Ministry of Health is conducting hearings to address a number of issues, and a draft law is expected before the end of the year.

While Germany would represent a large adult-use cannabis market, it isn’t the first country to legalize recreational marijuana in the European Union. In Malta, adult-use cannabis was legalized in December 2021, and the country has already been awarding licenses, including licenses to sell cannabis to other countries. The first shipment of medical cannabis products outside the country went to Germany in June of this year.

However, most countries in the European Union are still a long way from legalizing adult-use cannabis. In fact, some haven’t legalized medical cannabis or decriminalized it yet while others are just getting started. In February, Italy’s Constitutional Court rejected a voter ballot initiative that would ease restrictions on growing cannabis and other cannabis-related offenses. In June, the government of Spain approved medical cannabis sales in pharmacies. Sales are expected to start this year.

Switzerland (not a member of the European Union) launched an adult-use cannabis trial program this summer that allowed a few hundred people in the city of Basel to purchase cannabis for recreational use. The launch is part of a two and a half year study to learn more about “alternative regulatory forms” for cannabis.

In June, Swiss lawmakers removed the ban on cannabis from the country’s Narcotics Act. At the same time, changes were made that would allow patients to get a normal prescription from their doctor for medical cannabis rather than a special permit. Now, cannabis will be part of the pharmaceutical system in Switzerland and controlled by the health authority, Swiss Medic.

Also in Europe, Isle of Man issued its first medical cannabis license granting permission to import and dispense medical cannabis products to people with private prescriptions. However, medical cannabis is still unavailable through the country’s healthcare system and there are no physicians authorized to prescribe it to patients.

On Europe’s southeastern Balkan Peninsula, Albania plans on legalizing export-only cannabis cultivation for medical and industrial purposes. It’s a controversial move given the country’s reputation as a hotbed for illegal cannabis production and drug trafficking.

In June, Thailand became the first country in Asia to legalize the cultivation, sale, and possession of cannabis for recreational use. Earlier this year, cannabis was removed from the country’s list of controlled drugs. In an unprecedented move, the government planned to distribute 1 million cannabis seedlings to citizens starting one day after legalization took effect.

In South American and Central America, countries are following patterns similar to other parts of the world with some countries legalizing cannabis and others not even close to legalizing it. For example, earlier this year, the Costa Rican president partially vetoed a bill to legalize both medical cannabis and industrial hemp.

Further south in Brazil, the country’s Superior Court of Justice ruled that three patients could grow their own cannabis and extract the oil for medical use. The decision is expected to be adopted across the country in similar cases and is significant because home growing of medical cannabis is not allowed in Brazil. Instead, medical cannabis products must be imported under current laws.

Cannabis regulations vary from one country to another, and every timeline for medical and/or adult-use legalization is different. Based on what we’ve seen during the first seven months of 2022 in international markets, it’s safe to say that one thing is very clear. Progress is consistently slow.