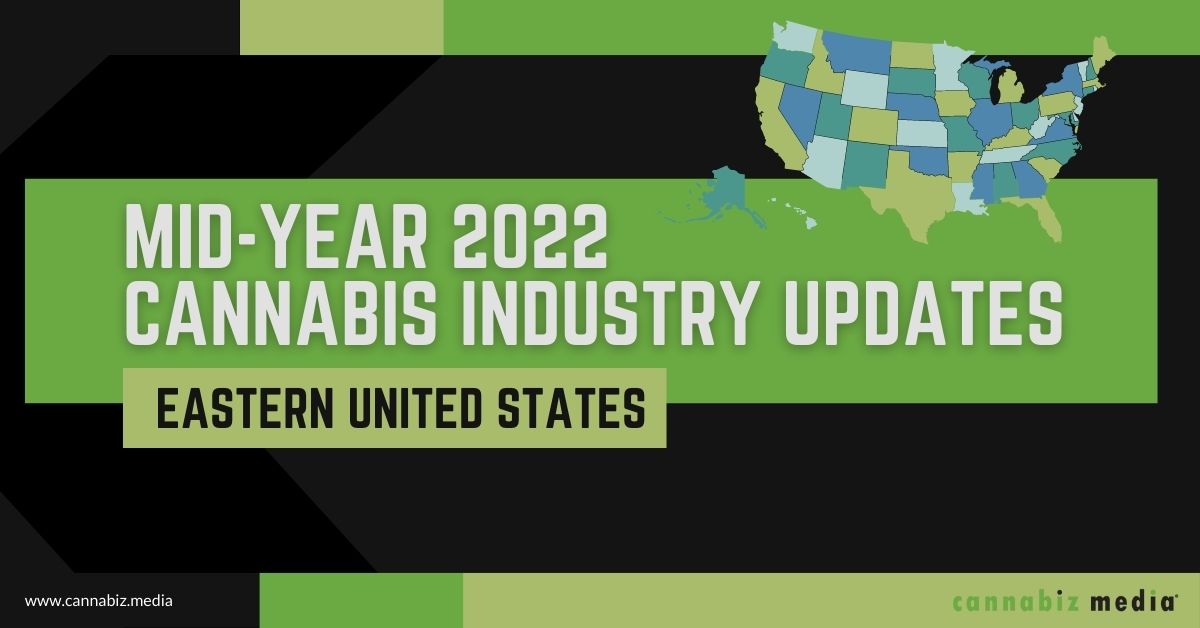 So far this month, we covered what’s been happening in the U.S. cannabis industry in the western states , midwestern and southern states, and five states rolling out medical programs during the first seven months of 2022. This week, we’ll dive into updates from the northeastern states with a future article to come about international markets.

With adult-use sales projected to start before the end of 2022 (although the feasibility of that start date is being questioned by many people), more than 37,000 license applications were submitted during the first half of the year to the state’s lottery for 56 adult-use cannabis licenses. The state will have eight types of licenses for the adult-use program, and the number of licenses awarded for each type will be divided equally between general applicants and social equity applicants.

The first step to obtaining a social equity license in Connecticut’s adult-use cannabis market is to have an application approved by the Social Equity Council, which verifies that the applicant meets the requirements to receive social equity status.

In July, Connecticut’s Social Equity Council recommended that 16 of the 41 social equity applicants for cultivation licenses should move to the next phase of the approval process, and within a month, multiple lawsuits had been filed by 16 applicant companies that did not receive social equity permits for cultivation. In addition, five retailer applications were approved for social equity status.

The big news out of Maine during the first seven months of 2022 happened in August when a federal appellate court ruled Maine’s law requiring that medical cannabis business owners must be state residents violates the U.S. Constitution. Barring an appeal, Maine will have to drop the residency requirement for its medical cannabis program – something that has already been done for its adult-use market following a separate legal challenge.

Interestingly, both lawsuits challenging residency requirements for license holders in Maine’s medical and adult-use markets were filled by Wellness Connection of Maine. The current case was originally filed in 2020 when Wellness Connection (owned by Maine residents) wanted to sell its company to High Street Capital Partners, which is connected to Acreage Holdings, a multi-state operator based in New York.

The federal court’s ruling in this case is stirring up a great deal of conversations about cannabis and interstate commerce. The court’s decision pointed to a violation of the Dormant Commerce Clause of the U.S. Constitution, which has long been at the center of debates about whether or not banning interstate commerce in the cannabis industry is legal or not.

Important changes have been made to reform the Massachusetts cannabis program that previously made it difficult for small businesses to compete with large companies and their deep pockets. Gov. Charlie Baker signed a bill in August 2022 that gives the Massachusetts Cannabis Control Commission authority to reject or approve local impact fees, which have been a source of corruption and extortion for years.

The new law also lays a path for consumption lounges in Massachusetts and creates a Social Equity Trust Fund that will devote more state money to grants and loans for cannabis entrepreneurs who have been harmed by the war on drugs.

New Jersey has nearly 130,000 registered medical cannabis patients, and between April 21 and June 30, 2022, adult-use cannabis sales reached nearly $79.7 million. A widespread concern at throughout 2022 has been whether the approved license holders would be able to meet supply demands for both the existing medical cannabis market and the new adult-use market.

In 2022, New York became the first state to allow licensed hemp growers to apply for and obtain conditional licenses to grow cannabis before anyone else. The conditional license would help prevent shortages when the adult-use market launches later this year or in early 2023. By mid-July, the total number of approved adult-use cannabis cultivators grew to 223.

Both the cultivation licenses for hemp farmers and the retail social equity licenses are being awarded before applications will be accepted from general applicants as part of the state’s Seeding Opportunity Initiative.

Medical cannabis businesses had a big win in June 2022 when a Pennsylvania judge ruled that they could start selling vape products again after they had been recalled by the state Department of Health in November 2021. The state plans to appeal, but the Department of Health can no longer prevent license holders from distributing the vape products it had recalled four months earlier.

Medical cannabis growers didn’t receive similar good news during the first seven months of 2022. In July and August, two independent cultivators, Hanging Gardens and Calypso Enterprises, laid off approximately 50% and 75% of their workers, respectively. Both companies cited the Department of Health’s ineffectiveness in enforcing rules in the state’s medical cannabis program as the cause, which has allowed anti-competitive practices to flourish and monopolies and oligopolies to thrive.

In May, the first cultivation license was awarded in the Vermont adult-use market, and by early June, seven additional cultivation licenses and two testing lab licenses had been approved. The first licenses were awarded to existing medical license holders and social equity or economic empowerment applicants.

As of August 23, 2022, Cannabiz Media is tracking 160 active licenses across the supply chain in Vermont. Adult-use cannabis sales are expected to launch in Vermont on October 1, 2022.

The Northeast adult-use cannabis market is set to grow exponentially within the next six to 12 months. Of the nine states discussed above, only two won’t have an operational adult-use cannabis market by this time next year. Some of these states’ adult-use programs are more restrictive than others, but New Hampshire and Pennsylvania’s lack of legal recreational cannabis markets are in direct opposition to voters’ preferences. Hopefully, lawmakers in both states will catch up to their constituents in the near future.