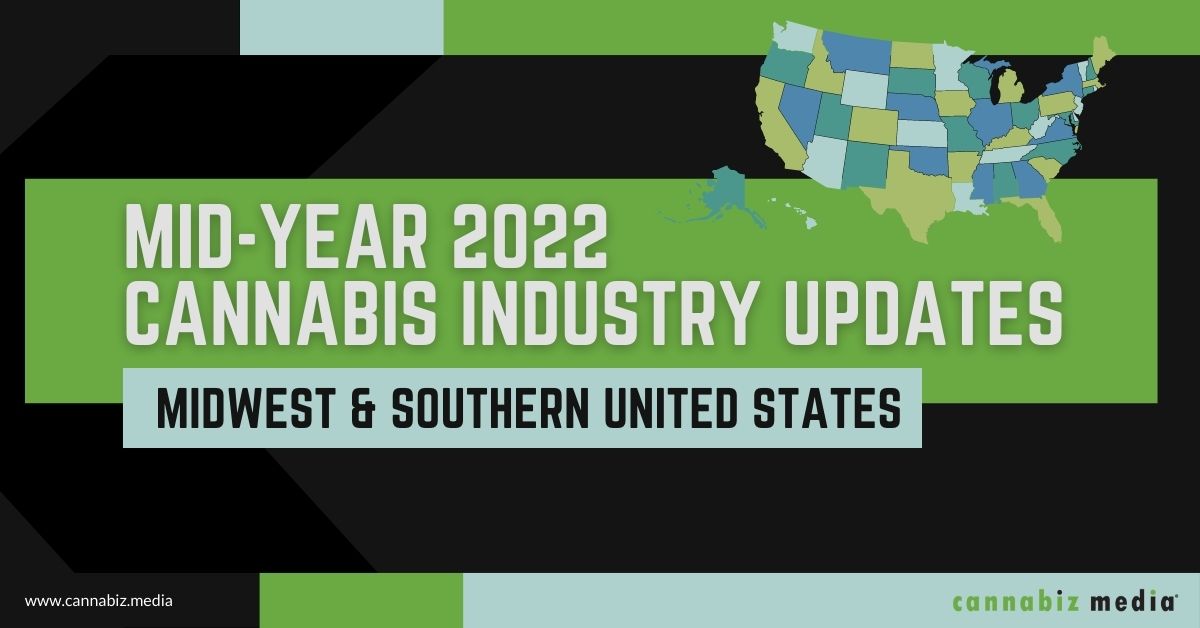 Last week, we covered what’s been happening in the western states of the U.S. cannabis industry during the first seven months of 2022. This week, we’ll dive into updates from the Midwest and Southern United States with future articles to come about the Eastern U.S. and international markets.

Note that the breakdown used to divide states into regions for this article is loosely based on the National Geographic United States Regions Map. States with no significant cannabis industry updates are not included.

Illinois started 2022 with only 21 licensed cultivators, but in March, a court ruling allowed 60 additional adult-use craft cannabis cultivation licenses to be granted. In June, 48 additional craft grow licenses were awarded as part of the state’s social equity effort.

One month later, 185 new conditional adult-use retail licenses were awarded. Retail license recipients have 180 days to take specific required steps in order to obtain final license approval from regulators. These new licenses opened the doors for market expansion and were welcomed by the industry and consumers.

New rules for Michigan’s cannabis program went into effect in March, which lowered some fees, removed some obstacles, created a new educational research license, and opened new opportunities for entrepreneurs.

The state’s first licensed cannabis consumption lounges opened in Detroit during the first half of 2022 as well, but the industry still faced problems. Prices for wholesale adult-use cannabis dropped in July, and smaller operators were struggling. Consolidation is likely in the near future.

While adult-use cannabis has yet to be approved in Minnesota, medical cannabis dispensaries in the state were allowed to start selling dried flower on March 1, 2022. Both licenses are owned by big multi-state operators (MSOs). In addition, hemp-derived food and beverages including 50 mg of THC could be sold to adults age 21 and older in grocery stores and other convenience stores rather than licensed dispensaries starting on July 1. In response, many cities banned cannabis edible sales or are still considering bans.

A May 2022 appeal to a 2020 lower court decision claiming the state’s medical cannabis license caps was illegal ended up with the judge upholding the lower court’s decision. The cap of 60 cultivation licenses still stands in Missouri.

While cannabis advocates have been working to collect 400,000 signatures to put adult-use cannabis on the November ballot, the count was still short of required signatures from two of the state’s six congressional districts as of late July. The deadline is August 9, 2022.

New Approach North Dakota submitted approximately 66% more signatures than were required to put adult-use cannabis legalization on the November 2022 ballot for voters. It’s up to the North Dakota Secretary of State to decide by mid-August if the measure receives approval to appear on the ballot. The measure’s language says regulators would have until October 1, 2023 to implement an adult-use cannabis program.

In May, the state’s pharmacy board approved 70 provisional dispensary licenses, which would more than double the number of dispensaries in Ohio and give more patients access to medical cannabis.

In January 2022, South Dakota issued its first three medical cannabis dispensary permits. However, cultivation and processing licenses were not issued at that time. It wasn’t until July that sales began in one of those dispensaries. By that time, the state had approved 69 licensed dispensaries, 29 cultivators, 11 manufacturers, and two testing labs.

In June, the Alabama Medical Cannabis Commission released plans for the regulations expected to be in place when the state’s medical cannabis program launches. Licenses for cultivators, processors, retailers, transport companies, and testing labs will be awarded, and it’s expected that applications will be available for request on or about September 1, 2022.

The state’s program includes a license cap. Only five vertically integrated companies, 12 cultivators, four processors, and four dispensaries (which have the option to open facilities in three locations – each in different counties – for a possible total of 37 dispensaries). Flower and edibles will not be allowed.

A March 2022 ruling from a circuit court judge extended a restraining order preventing regulators from issuing the final two medical cannabis dispensary licenses available in the state. Fast forward to August, and the state’s election board rejected a recreational cannabis measure from appearing on the November 2022 ballot. It’s one step forward and two steps back for Arkansas’ legal cannabis industry.

Delaware’s medical cannabis sales grew significantly during 2021, but when it comes to adult-use legalization, 2022 has been filled with obstacles. In May, Gov. John Carney (D.) vetoed a cannabis legalization bill that would legalize possession of up to one ounce of cannabis for adults age 12 and older. In June, the state’s House of Representatives voted against overriding the governor’s veto.

In February, she signed emergency legislation to allow senior citizens over age 65 to self-certify their medical cannabis eligibility, allow patients whose registrations expired on or after March 1, 2020 to purchase medical cannabis until September 30, 2022, and create a 4/20 Medical Cannabis Sales Tax Holiday Week from April 15-24, 2022. During that week, patients did not have to pay the state’s 6% medical cannabis sales tax.

On July 6, Mayor Bowser signed additional legislation that allows all adults age 21 and older to self-certify their medical cannabis eligibility. This would allow all adults in D.C. to access cannabis products despite the fact that D.C. cannot legalize adult-use cannabis. The reason D.C. cannot legalize adult-use cannabis is because it cannot control its own budget. As a federal city under congressional control, its budget is part of the federal budget, and there is language in the federal budget that forbids it – specifically, part of the Harris Rider.

Back in 2014, Rep. Andy Harris (R-Maryland) was identified as the person primarily responsible for adding the following language to the Harris Rider, “None of the funds contained in this Act may be used to enact any law, rule, or regulation to legalize or otherwise reduce penalties associated with the possession, use, or distribution of any schedule I substance under the Controlled Substances Act.”

Until the language changes, there will not be a legal adult-use cannabis market in Washington, D.C., and the language is included in the 2022 federal budget.

It was more of the same in Florida’s cannabis industry during the first half of 2022 aside from news about its single vertically integrated medical cannabis license with a $146,000 license fee that is reserved for a Black farmer per a 2017 law passed by the Florida Legislature. This single license is expected to be quite valuable, and in June, regulators received 12 applications from farmers backed by investors.

There have been no big changes in Georgia’s cannabis industry so far in 2022 (and none are likely to come in the remainder of the year). In April, legislators did not come to agreement on a bill that would legalize the production and sale of medical cannabis.

Maryland legislators voted on April 1, 2022 to allow voters to decide on adult-use legalization in November 2022. In early August, regulators made changes to the state’s existing medical cannabis program to make it easier to participate and more affordable. The price of ID cards dropped in half (from $50 to $25) and the length of time ID cards are valid doubled (from three years to six years).

On February 2, 2022, Gov. Tate Reeves (R.) signed a medical cannabis bill into law. However, he is still opposed to an adult-use cannabis program. For the medical cannabis program, the bill is more restrictive than what residents voted for in 2020, particularly as it relates to potency caps and purchase limits. There will be no limits on licenses, but by May 23, 2022, 80 municipalities and 19 counties had opted out. The license application process began in June.

With a newly elected governor entering office at the start of 2022 who said he had no plans to rush opening the state’s voter-approved adult-use cannabis market, followed by a number of proposed changes to the adult-use cannabis law filed in the first month of the year alone, things weren’t looking good for the industry.

In February, a Virginia House panel blocked a measure that would allow existing medical cannabis operators and some hemp companies from selling adult-use cannabis in mid-September 2022 rather than waiting until January 2024. It looks like it’s going to be a long road before the adult-use launch date can be moved up if it can be moved up at all.

During the first seven months of 2022, cannabis laws and markets across the Midwest and South have been in flux. Some states you may not expect are growing and improving their programs while others are at a complete standstill or even taking steps backward. Progress is inevitable though since most voters are in favor of legalizing medical and adult-use cannabis. We’ll just have to keep waiting until lawmakers catch up to their constituents.