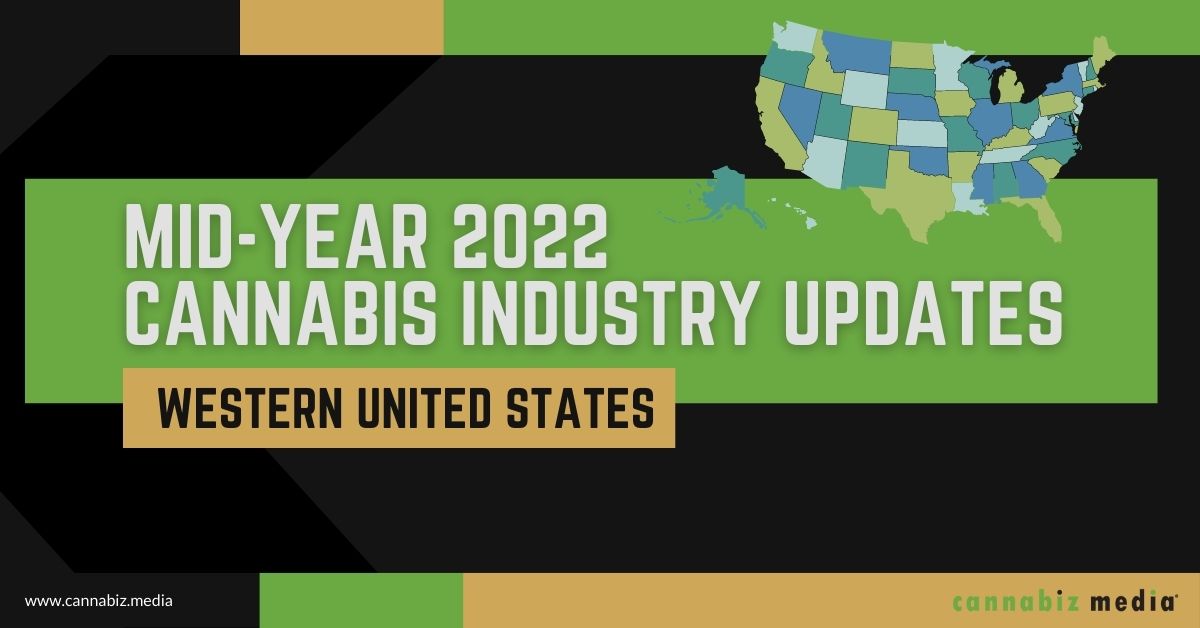 It’s mid-year 2022, and if you read news reports, it may seem like the sky is falling on the U.S. cannabis industry. Yes, there are problems, and many license holders in the legal cannabis industry are struggling. However, with any highly regulated and growing industry, there will be challenges, changes, consolidation, and contraction at different times.

The next few years of the cannabis industry will definitely show which companies and brands have staying power. These are the businesses that will be able to survive and thrive despite (and possibly because of) the challenges, changes, consolidation, and contraction they face in their markets.

With that said, let’s take a look at what’s been happening in the U.S. cannabis industry during the first seven months of 2022. This topic is big, so it will be split up between additional regional articles published on a weekly basis for the next several weeks. A final industry update post will cover international markets.

The big news from Alaska’s cannabis industry during the first half of 2022 happened on January 23, 2022 when the Alaska Marijuana Control Board approved the first onsite cannabis consumption licenses. Two businesses were awarded licenses – Cannabis Corner in Ketchikan and GoodSinse LLC in Fairbanks.

In January, numbers were released showing how big Arizona’s cannabis market was during the first year of adult-use operations. Adult-use sales began on January 22, 2021, and within the first 10 days of transactions, sales reached $2.9 million. Over the full year after adult-use sales began, licensed businesses sold $1.23 billion in combined adult-use and medical cannabis products generating approximately $528 million in revenue for licensed adult-use retailers.

When Arizona’s adult-use sales launched in January 2021, 73 of 130 licenses had been approved by the state’s regulators. Ultimately, only 169 vertically integrated licenses will be awarded for the state.

Subsequently, multiple lawsuits were filed disputing the state’s social equity licensing processes with the most recent filed in March 2022. The Arizona Department of Health Services awarded social equity cannabis business permits through a lottery in April 2022.

A total of 1,301 applications were submitted for social equity permits, and 26 licenses were awarded. Of those awarded licenses, 10 went to applicants who partnered with existing cannabis operators. In fact, some existing operators partnered with multiple applicants and won as many as five additional licenses as a result.

As 2022 began, the cannabis industry in California was in trouble, and some industry professionals feared the industry was on the verge of collapse. One of the biggest problems has been the high taxes that licensed operators are required to pay – a $161 per pound state cultivation tax, a 15% state excise tax, county taxes, city taxes, and more.

With no quick action coming from the state level, a number of California cities and counties took matters into their own hands by providing their own tax relief to licensed cannabis businesses. For example, in February 2022, officials from Humboldt County reduced the cultivation tax by 85%. The reduction would stay in effect for one year. San Francisco’s city tax on cannabis businesses was suspended until 2024. A number of additional counties and cities delayed, suspended, or reduced tax payments for cannabis license holders.

The year was half over before Gov. Gavin Newsom signed the state’s 2022-2023 budget, which included changes to the state’s cannabis business tax requirements. As a result, the cultivation tax has been eliminated, and the excise tax has been capped at 15% until 2025.

In March 2022, the first social equity consumption lounge license was awarded in Denver, which was great news. However, there were also challenges in the country’s most mature cannabis market.

Cannabis sales in Colorado have been on a decline this year. In fact, sales dropped 32% compared to July 2020 sales. Licensed operators have been laying off workers, and the state will lose millions in tax revenue if the declines continue.

At the same time, wholesale flower prices dropped to an all-time low in July 2022. License holders are struggling with falling prices, declining sales, license bureaucracy, burdensome compliance requirements, and high taxes. This is bad news after the state consistently recorded increased sales every year since 2014.  Despite its maturity, the Colorado cannabis market is still a challenging one for license holders to operate in.

Taxes and difficult medical-ID verification procedures were cited as two primary contributors to the sales decline. To bring patients back to the legal market, the report recommended increasing the number of patient per dispensary, increasing the amount of cannabis that cultivators can produce, and opening a wholesale market.

There have been some positive changes in Hawaii’s cannabis market during the first half of 2022. For example, rules allowing dispensaries to sell gummies, chocolates, cookies, brownies, beverages, and some other edible products went into effect on February 24, 2022. In March, the Hawaii Department of Health launched a visiting patient cannabis program, which provides a way for visitors to legally purchase cannabis products in the state.

In addition, a sixth dispensary passed inspections to open in Hawaii during May 2022. The new dispensary is the first on the island of Kauai. Two other dispensaries are expected to open by the end of 2022, which will improve access to legal cannabis across the state.

Adult-use cannabis sales began on January 1, 2022, and sales surpassed $1.5 million in the first weekend. By the end of the first month, sales exceeded $12.8 million. Medical marijuana sales during the same month were nearly $9.8 million. In March 2022, adult-use sales increased to $15.9 million for the month while medical cannabis sales stayed flat at $9.8 million.

In terms of licensing, Montana tribes received bad news in June 2022 when the state’s Department of Revenue director clarified that the original interpretation of the law as it relates to tribes was wrong. Rather than being restricted to starting a tier 1 level cultivation operation and later expanding (like other license holders are allowed to do), tribes are restricted to tier 1 – the lowest level of cultivation – with no expansion.

In 2022 year-to-date licensing news, Nevada regulators and the Cannabis Control Commission approved rules that created new opportunities in the state’s cannabis industry. Final rules for cannabis consumption lounges were approved in June 2022, and 60-65 consumption lounges could open as a result.

The Cannabis Control Board is likely to start awarding consumption lounge licenses in the fall, and half of the first round of licenses will go to social equity applicants that have written diversity plans. The first lounges are expected to open before the end of 2022.

As the state prepared for the April 1, 2022 launch of adult-use cannabis sales, regulators doubled the number of plants cultivators can grow to meet expected demand. In March, two New Mexico tribes signed an agreement to regulate their own cannabis businesses on their land as well as to apply for licenses to operate businesses outside of their land.

Regulators made a few changes during the first half of 2022 that could have significant effects on the state’s cannabis license holders and industry. In February, regulators reduced the backlog of violations from nearly 500 to 40 by changing processes and being more tolerant of violations based on a cannabis company’s record, history of cooperation with regulators, and history of correcting and not repeating violations.

In April 2022, the level of THC allowed in cannabis-infused edibles doubled from 5 milligrams to 10 milligrams, which could open opportunities for more products and brand extensions in the state.

Despite these positive changes, Oregon license holders still faced threats from declining wholesale prices, decreased sales, and an active unregulated market. In April, the state stopped issuing new cannabis licenses to anyone who submitted an application after January 1, 2022 in response to a requirement in a 2022 bill that the Oregon Legislature passed.

The adult-use cannabis market has been active in Washington for a decade, but license holders still face significant challenges. Declining wholesale prices and high taxes are two of the biggest problems.

This is particularly true for licensed cultivators according to data from the Cannabis Cultivator Survey, which was conducted by Cannabiz Media and the Wells Fargo Equity Research team during the first half of 2022.

For example, the state’s excise tax is 37% - higher than any other state. Higher taxes lead to higher prices for consumers who are more likely to buy from the unregulated market.

Whether cannabis markets are new or mature, license holders face challenges that are causing them to struggle. Some challenges are common across multiple states, such as the unregulated market, taxes, and burdensome compliance requirements. Other challenges that reduce competition, lead to higher prices for consumers, and limit consumer access are caused by specific state or local regulations.

Bottom-line, cannabis markets in states in the western United States will survive, but with some much needed regulatory changes, they could thrive a lot sooner.