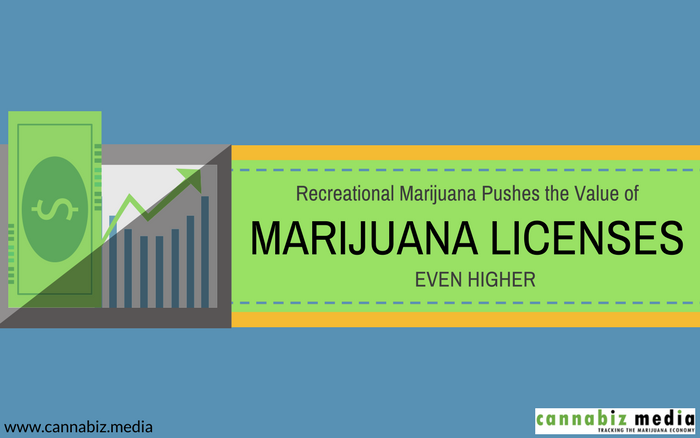 Recreational Marijuana Pushes the Value of Marijuana Licenses Even Higher

How much is a marijuana license worth? For anyone who wants to get into the business of growing, processing, or dispensing marijuana, a license could be worth millions of dollars. In fact, marijuana license sales in 2017 show their value keeps getting even higher. As a result, license holders in states where legalization of recreational marijuana has already happened or might happen in the near future are often waiting to sell to the highest bidder.

Consider what’s happening in California. Four out of 14 marijuana dispensaries in Santa Cruz County, California were sold in the past year. That’s nearly 30% of dispensary licenses changing hands for large sums of money. Dispensary owners who paid $125,000 for their licenses several years ago are now selling them for up to $2.4 million.

The sales rush isn’t just happening in Santa Cruz County. Other license holders in California are getting multiple offers, and these offers don’t always include the license holders’ businesses. Many times, inquiries come from investors who just want the license and nothing else.

The growing value of marijuana licenses is happening across the country. In 2016, multiple licenses changed hands in Colorado with prices as high as $4.5 million. Similar value is being placed on licenses in Nevada. In March of this year, Canada’s Golden Leaf Holdings purchased Nevada cultivation and extraction licenses from NevWa (which operates as Grassroots) for nearly $2 million.

All Signs Point to Sustained Demand for Marijuana Licenses

Based on recent trends, it seems that the demand for marijuana licenses will be sustained for the foreseeable future and prices will continue to rise. There are two primary reasons for this trend:

Some of the largest potential markets in the United States are just starting to open up to the medical marijuana industry. Most importantly, Florida is making changes to its medical marijuana laws that should open the doors to more sales and greater market penetration.

The Changing Landscape of the Marijuana Industry