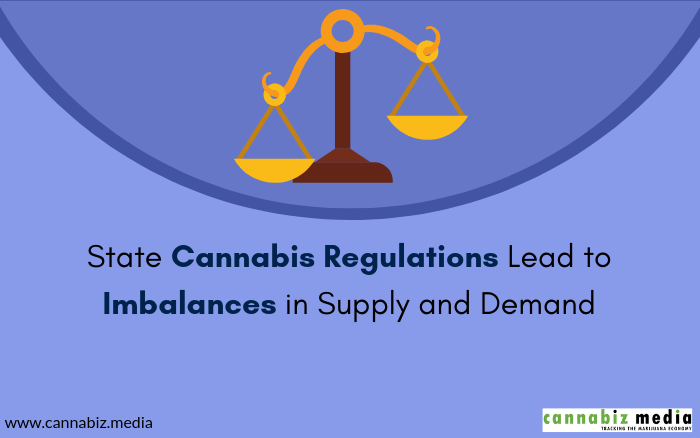 State Cannabis Regulations Lead to Imbalances in Supply and Demand

The laws of supply and demand are imbalanced in the cannabis industry across multiple states in the United States and Canadian provinces. As a result, many markets face cannabis oversupply or undersupply problems, and much of the problem can be attributed to each state’s regulatory framework for legal adult-use and/or medical marijuana.

The laws of supply and demand are simple. When consumer demand and commercial supply balance, all consumers get the products they want and businesses have an opportunity to maximize profit. If demand outweighs supply, consumers don’t get what they need and businesses don’t make as much money as they could if demand was met. If supply outweighs demand, businesses will be left with unsold goods that equate to lost revenue.

In a free market system, supply and demand should be self-balancing, but when you mix in regulations that restrict production and sales, supply and demand imbalances are more likely, which is what we’ve seen happening in both the U.S. and Canadian cannabis industries.

The demand for medical and recreational cannabis continues to rise, but in some areas of the U.S. and Canada, the supply of cannabis can’t meet the growing demand. As a result, prices may increase, consumers may have to travel long distances to get the cannabis products they need, and many consumers may turn to the black market to buy.

For example, Canada opened its adult-use cannabis market on October 17, 2018, and within hours, some stores across the country were having supply problems. After the first few weeks of operation, it was clear that Canada’s cannabis market was facing a product shortage that would last a very long time. The province of Quebec opted to close its stores for three days per week, while Alberta stopped issuing retailer licenses, and Ontario limited the number of store licenses to just 25.

One of the biggest factors causing the cannabis shortage in Canada was regulation. The amount of time to obtain a license to grow marijuana in Canada’s legal market was excessive with some cultivators waiting months or even a year. Once a grower obtained a cultivation license, it needed to produce two full crops, have them tested, get its sales software audited, and apply for a sales license, which could take another year.

Some industry professionals believe the cannabis supply problems in Canada will take at least 12 months to correct while others believe it could extend to 24 months.

Michigan also faced a medical marijuana shortage in January 2019 when new regulations went into effect requiring that dispensaries only obtain cannabis from licensed commercial growers. However, the state doesn’t have enough growers and processors to meet patient demand.

The problem escalated quickly when patients couldn’t access the medicine they needed. As a result, the governor and director of Michigan’s Department of Licensing and Regulatory Affairs asked the state’s medical marijuana board to allow dispensaries that had been operating under temporary licenses to reopen with supply obtained from caregivers (as they had been doing in the past).

This is just a temporary solution to solve the undersupply problem in Michigan. The state still needs to change regulations to ensure demand for medical marijuana is met in the future.

Undersupply is also a problem in Pennsylvania. When the number and types of qualifying medical conditions increased there was a jump in physician-certified patients in the state from 70,128 to 161,273 between January 1 and September 1, 2019. Despite the growth in patients, the amount of cannabis produced during the same time period didn’t change.

Pennsylvania did license additional growers in 2018, but until they’re operational (possibly during the fourth quarter of 2019), there will be a cannabis shortage.

Production isn’t the only thing that can cause supply problems. In California, a different type of shortage happened in 2018 when new testing regulations passed and there weren’t enough licensed testing facilities to handle the required testing. As a result, retailers weren’t able to meet the demand of the state’s growing recreational cannabis market.

The problem of cannabis oversupply in Oregon begin in 2017, and by the end of 2018, an abundance of cannabis drove prices down and profits with them in the legal cannabis market. As a result, many licensed businesses had to close. Most of these businesses were small without the capital needed to withstand significant losses in sales for an extended period of time.

One of the primary factors causing Oregon’s oversupply problem is regulations. Many people believe the state’s regulations allowed for the approval of too many cultivator licenses without canopy size limits. In January 2019, the Oregon Liquor Control Commission reported that the state had enough cannabis in dispensaries, processing plants, and warehouses to meet demand for six years.

Both Washington and Colorado experienced similar oversupply problems in recent years. To stop the problem from getting bigger, both states stopped issuing cultivator licenses.

According to the Cannabiz Media License Database, the number of cultivator licenses issued in Oregon during 2018 increased by 26% over the number issued in 2017 compared to a 1% increase in Washington and 1% decrease in Colorado.

Colorado uses a different approach to avoid oversupply of cannabis by issuing five tiers of production licenses based on the number of plants the cultivator is allowed to grow (1,800 plants to 13,000 plants). Every cultivator starts with a tier one license and can only move up to the next tier if they can prove that they sold 85% of the crop they grew in the previous six months. Those that can’t prove they sold 85% may be dropped to a lower license tier.

Balancing Supply and Demand in the Cannabis Industry

Clearly, it will take some time for regulators in the U.S. and Canada to solve their cannabis supply and demand problems, but states and provinces can learn from each other. Consider Oklahoma where a very large number of licenses are being approved. How will this affect supply and demand? Is an imbalance the likely result? Only time will tell.

It’s quite possible that states with cannabis shortages might need to learn a lesson from Nevada where supply problems after the launch of its adult-use market led the governor to declare a state of emergency, which allowed more applicants to apply for licenses to open the supply chain.

Oversupply problems are a different matter entirely. This year, Oregon’s Senate Bill 582 allows the governor to enter into agreements with other states to export cannabis. While interstate transportation and commerce in the cannabis industry is still illegal at the federal level, many people believe that removing this barrier could open the market and allow efficiencies, competition, and pricing to evolve freely and supply and demand to self-balance.

The lesson to take away is this – states might be making their own rules, but they don’t have to operate in regulatory silos. In other words, states developing marijuana programs shouldn’t repeat the mistakes made by other states.

Eventually, marijuana programs will run smoothly across the U.S. and Canada, but until then, the problem of supply and demand imbalance is still very real.