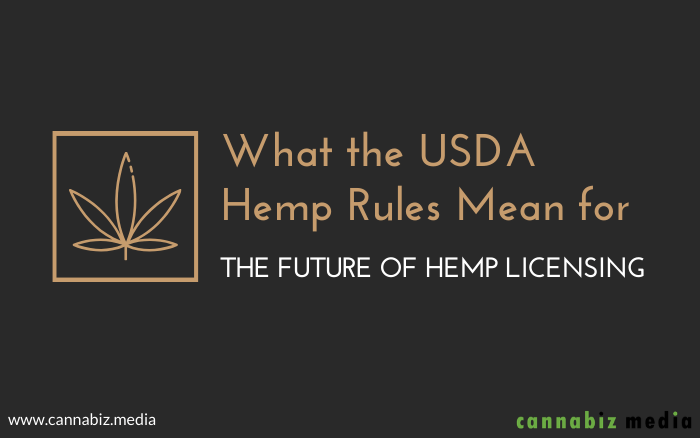 On October 29, 2019, the U.S. Department of Agriculture (USDA) released its interim final rules for the U.S. Domestic Hemp Production Program with a 60-day period allowed for comments. Once the comment period ends and the interim rules are finalized, they will stay in effect for two years at which time, the USDA will review and revise them based on everything learned during those two years.

For farmers and businesses that want to operate in the hemp industry, the USDA will begin approving licenses at the end of November. Starting in 2020, the USDA will accept hemp producer licenses between August and October 31 each year, and licenses will be valid until December 31st three years after the license was granted.

Applicants are required to provide contact information, land information, and a criminal history report to apply for a license, and if they secure a license, they may not sell, assign, transfer, pledge, or otherwise dispose of it. A license is required for each location where hemp will be grown.

Licensees will be subject to a variety of compliance requirements including testing, inspections, recordkeeping, and destruction. For example, growers that produce crops which test higher than 0.3% THC content will be required to destroy the crops in a compliant way. If a grower is found negligent three times in a five-year period, they will be banned from producing hemp for the next five years.

The USDA’s interim hemp rules provide a federal framework for the U.S. hemp industry but states are still allowed to ban hemp within their borders. Currently, Idaho, Mississippi, New Hampshire, and South Dakota have banned hemp growing and production. Despite the USDA’s rules, no hemp can be grown in these states.

States also have the option to create their own hemp rules, which can be stricter than the USDA’s federal rules. However, each state’s rules must be approved by the USDA. As of November 7, 2019, only 11 states and 11 tribes had submitted state hemp plans to the USDA for review and approval, and all but two of them were submitted before the USDA released its interim hemp rules. States that submitted plans prior to the release of the USDA’s rules will have an opportunity to modify them.

Challenges and Concerns for the Future

For hemp producers, license applicants, and licensees, the USDA rules have created some uniformity but state-by-state differences will still create a regulatory patchwork that could be difficult to navigate. In recent months, for example, multiple instances have been in the news of legal hemp being seized when it was being transported between states, but the USDA interim rules do nothing more than state that interstate transportation is allowed. Without uniform tools and procedures for law enforcement to identify hemp vs. cannabis, these types of seizures and problems will continue.

In addition, the risk of hemp oversupply with no allowance for exports in the USDA rules could create market imbalances in the near future. The USDA’s interim final rule included data about the size of the U.S. hemp industry that draws attention to the possibility of oversupply. According to the USDA, there were 3,543 hemp producers in 2018, and that number is expected to increase to 7,700 (6,700 producers under state and tribal plans and 1,000 producers under the USDA plan). Furthermore, the USDA reports that 77,844 acres of hemp were planted in 2018, and that number is expected to double in 2019.

Another concern voiced by many small hemp farmers is the lack of protections in the USDA rules for small producers against big companies that are likely to enter the market. It doesn’t appear that this problem will be addressed soon. USDA Undersecretary Bill Northey minimized the problem saying, “I think the state plans will make a difference. Certainly we’re going to see large and small processors as well. I really do believe that at the end of the day, most of the folks that will be growing this crop will be producers as opposed to companies. What we’ve seen so far is companies have worked with producers to grow the crop.”

Of course, there is a big difference between “what we’ve seen so far” and what we’ll see in the future now that the interim rules have been released. As with all things in the evolving cannabis and hemp industries, we’ll have to wait and see.

The USDA is treating the 2020 growing season as a test drive for the interim rules and will make adjustments before releasing a final rule. Only time will tell what changes will be made and which potential problems in the hemp industry will be solved when the final rule is released in two years.

To stay up-to-date on hemp and cannabis licenses across the U.S. and international markets, subscribe to the Cannabiz Media License Database.

7 Email Marketing Messages to Move People from Prospects to Customers