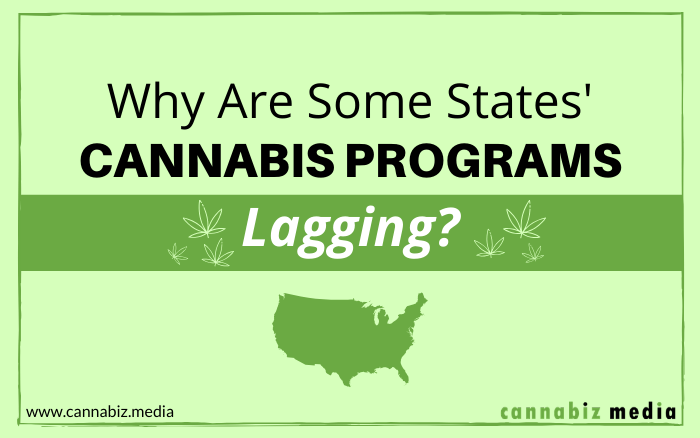 As more states legalize adult-use cannabis and expand their medical marijuana programs, the cannabis market continues to grow. However, that doesn’t mean all states’ cannabis programs are growing equally. In fact, some states are lagging behind significantly.

For example, social equity issues have delayed programs from getting off the ground in Maryland, Connecticut, and New York. License caps in states like Florida and Minnesota have limited growth of the industry as well as access for patients, and in some states, lawsuits questioning the fairness of how license applications were awarded have stalled businesses across the cannabis supply chain from opening.

Let’s take a closer look at some of the ways state regulations directly affect product accessibility, which significantly contributes to the success (or failure) of a state’s legal cannabis program.

Watching state cannabis markets over the years provides insights about a number of key factors that can be attributed to the growth, breadth, and depth of a state’s cannabis program. If a state is lagging in one of these areas, accessibility will be negatively affected and the growth potential of the program will be limited:

Politicians, lobbyists, and regulators in every state play a part in how fast cannabis programs within their borders launch and grow. For example, it can take years for some state’s programs to become operational, but both New York and Virginia fast-tracked the launch of their adult-use programs.

In New York, legislation to legalize recreational cannabis was “fast-tracked” by Governor Cuomo in March 2021, and in April 2021, Virginia legislators approved measures that bumped up the timeline for when personal cultivation, use, and possession of small amounts of marijuana from 2024 to July 1, 2021.

The longer legal cannabis (medical and/or recreational) has been available in a state, the larger the legal market in that state is likely to be. Common sense tells us a program that has been around for a short time hasn’t had time to grow and mature. For example, the programs in Minnesota and New York are newer than the programs in Washington and Colorado.

Ideally, as a state’s program matures, regulations should be set in a way that allows the program to grow. In this ideal situation, more licenses will be granted, more conditions will be qualified for medical cannabis, prices will stabilize, accessibility will improve, and the program will have a chance to be successful. When this doesn’t happen (California provides a good example), industry growth will be limited.

These four conditions are chronic pain, muscle spasticity, spinal cord injuries, and post-traumatic stress disorder (PTSD). However, the most important condition that must be covered for a state’s medical cannabis program to grow is chronic pain.

High taxes can make or break a state’s legal cannabis program. This includes taxes that businesses and consumers are required to pay, such as cultivation taxes, excise taxes, sales tax, and more.

In addition, the federal tax structure, such as Section 280E of the Internal Revenue Code, hurts the growth of state cannabis industries by limiting the profit licensed businesses can generate. Without adequate profit to reinvest into the business, growth is practically impossible. Instead, businesses struggle to stay open.

Rules set by counties, cities, and even neighborhoods can affect the potential growth of a state’s cannabis program. In many states, municipalities are allowed to ban legally licensed cannabis businesses from operating within their borders.

When this happens, patients and consumers have to travel further to get cannabis products, which makes it far less accessible to them. Considering that many local municipalities don’t allow cannabis delivery, this limitation can be extremely problematic. As a result, consumers might choose to purchase through the black market rather than through the state’s legal cannabis market.

Some states have extreme restrictions related to marijuana business licenses for growing, manufacturing, and dispensing. For example, some states require vertical integration of cannabis operations so a single license holder controls the cannabis from seed to sale. Florida is an example of a state that requires full vertical integration.

Furthermore, a state’s licensing process could cause delays in opening new businesses. Depending on how licenses are granted, it’s not uncommon for lawsuits to follow when applicants who don’t win licenses look to the courts to give them another chance by saying the process was unfair.

People need to have access to a product in order to buy it. If they can’t buy it, the market can’t grow. In some states, there are far fewer doctors registered to recommend medical cannabis then in others making it can be difficult for patients to find and visit participating doctors.

Furthermore, some states have licensed very few medical cannabis dispensaries or adult-use retailers, which means patients and consumers might have to drive hours to purchase marijuana products.

To put these numbers into perspective, think of it this way: Minnesota is 87,000 square miles, and the state originally capped the number of medical marijuana dispensary licenses to eight. That meant there was one license for every 10,000+ square miles (if the licenses were evenly spread across the state, which they were not). Fortunately, Minnesota regulators announced in December 2019 that the number of dispensaries would double to 16, but in many other states, the number (and locations) of dispensaries continues to hinder accessibility.

Fast forward to 2021, and the latest census data shows some shifts in state populations. In states that base the number of licensed dispensaries by population (such as Missouri), new licenses will need to be awarded to provide adequate accessibility. Only time will tell how quickly those licenses will be granted. In the meantime, market growth will be limited.

Bottom-line, in many states, patients and consumers need to travel far distances to access legal cannabis products. There is no doubt that this reduces sales overall, limits the success of a state’s legal programs, and bolsters the black market.

State and local rules can also create bottlenecks across the cannabis industry supply chain – from testing to sales. This can lead to a shortage in products, increased prices, and lower accessibility for medical marijuana patients and recreational marijuana customers.

For example, research from Michigan’s Marijuana Regulatory Agency found that there are not enough testing labs to test cannabis products before they can be placed on the market for sale. In fact, the research found it takes up to a month to complete the necessary testing. The researchers concluded that the testing backlog directly affects cannabis pricing and is one of the reasons prices remain high in the state.

Not All States are Alike

While the eight factors discussed in this article directly affect the growth of cannabis industries in many states, they’re not the only factors in play, nor does each factor impact every state. This is an industry filled with state-by-state nuances, and it is absolutely safe to say that no two states are alike.

What is clear is how these barriers affect a state’s cannabis program and its growth potential. In simplest terms, they cause less competition, higher prices and reduced accessibility for consumers, and none of those are results you want in a free and open market.

‍To stay up-to-date on all of these nuances, subscribe to the Cannabiz Media newsletter.