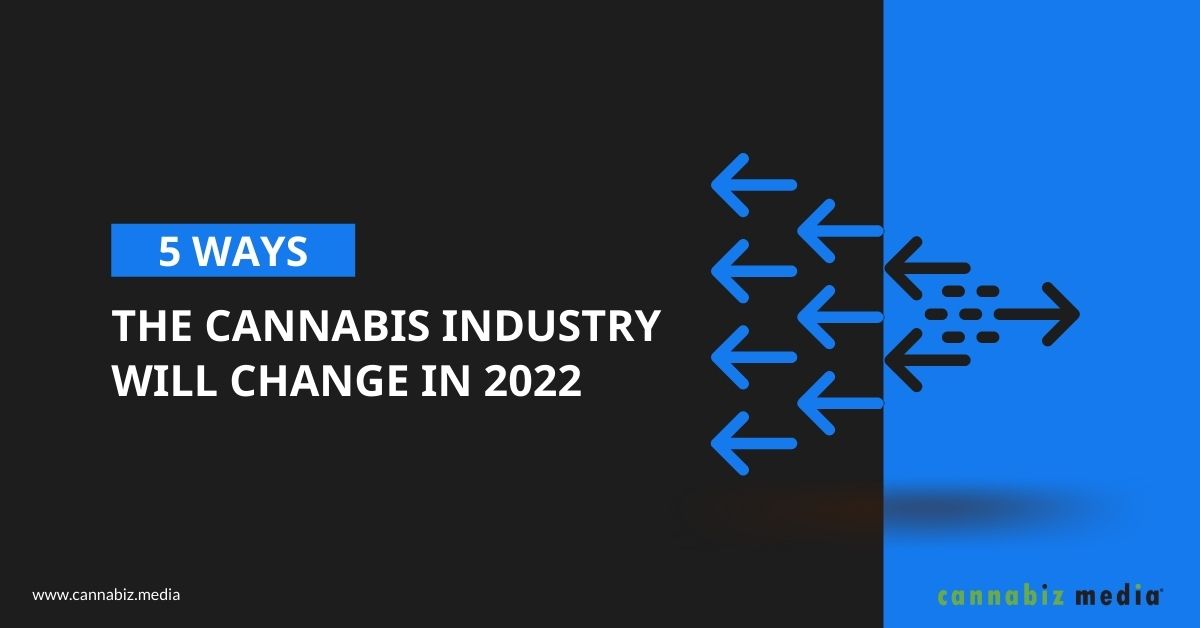 Legal cannabis sales in the United States during 2021 hit $37.4 billion and continued growth is expected for 2022. What makes this so incredible is that cannabis isn’t legal across the entire country. In fact, the industry’s sales have come from only 45 million customers.

That’s good news for the growth potential of the cannabis industry in the coming years, and in 2022, we’ll not only see legal sales increase, but we’ll also see some other much-needed changes. Let’s take a closer look at five of these important changes that should happen in the next 12 months.

Cannabis normalization is coming – albeit very slowly. After decades of the War on Drugs, it will take time to educate people and convince them to think differently about cannabis. However, 68% of Americans now support adult-use cannabis legalization, and 91% believe people should have access to medical cannabis.

We’ve also seen when Americans are given the opportunity to vote on legalization of medical and adult-use cannabis, they do so in large numbers. Unfortunately, we’ve also seen lawmakers ignore the will of the people and take steps to undo what voters have accomplished when it comes to legalization (we’re looking at you South Dakota and Mississippi).

In other words, Americans accept cannabis far more than lawmakers who are worried about their re-election chances. Normalization among the people is nearly complete. With cannabis markets in many states maturing and lawmakers seeing that supporting legalization doesn’t mean the world around them will collapse (or they’ll get voted out of office), normalization among lawmakers will inch closer to reality in 2022.

The cannabis industry has momentum as we head into 2022, and hopefully, that momentum will lead to more states legalizing cannabis and more local communities opting in to allow cannabis sales within their borders.

It’s very possible that medical or adult-use cannabis legalization could end up on voter ballots in 2022. Alternately, state lawmakers may take action to move cannabis legalization bills through the legislative process. More lawmakers realize that cannabis sales bring in a lot of tax revenue for their states. This is a particularly hot topic for them when states bordering their own legalize cannabis and residents cross the border to buy legal products. As a result, they’re giving that tax revenue to neighboring states.

Of course, all of those states won’t legalize adult-use and/or medical use cannabis in 2022, but some will, which will bring additional growth to the cannabis industry and greater access to legal cannabis for more people.

To put things into perspective, consider this – Illinois launched its adult-use cannabis market in January 2020. In 2021, the state generated almost $100 million more in tax revenue from adult-use cannabis sales than it did from alcohol sales. Clearly, there is a significant imbalance.

In California, the tax problem has gotten so bad that some say the state’s legal cannabis industry is on the verge of collapse. The good news is California Gov. Gavin Newsom said in early January 2022 that he supports cannabis tax reform in the state and plans to work with the Legislature to make changes that will stabilize the market. Hopefully, other state lawmakers will do the same.

4. All Eyes on the East Coast

California still dominates the U.S. cannabis industry, but as more states legalize medical and adult-use cannabis on the East Coast, they’re getting a lot of attention. Legal cannabis sales revenue in East Coast markets will hit an estimated $6.8 billion in 2022, and that number is projected to increase to $11.7 billion in 2025.

Looking further south on the East Coast, Florida could legalize adult-use sales in 2022 or soon after. If that happens, Florida would become the second largest cannabis market in the United States (behind California) with a projected $3.2 billion in annual sales in 2025.

Speaking of 2025 sales projections, we’re starting to see which states will offer significant long-term growth opportunities in the cannabis industry. Based on projections from Headset, the largest cannabis markets in 2025 will be in these states:

Each of these 17 states are projected to have more than $1 billion in combined annual sales in just three years from now. Not far behind will be Maryland with a projected $895 million in annual sales in 2025. Bottom-line, there are big opportunities ahead!

Key Takeaways about How the Cannabis Industry Will Change in 2022

Normalization, growth, legalization, taxes, and the East Coast are just some of the key things to watch in the cannabis industry during 2022. In other words, the next 12 months will be all about acceptance, accessibility, and affordability.

You can track all of the license changes that happen in 2022 by subscribing to the Cannabiz Media License Database, and to stay current on mergers and acquisitions, subscribe to Cannabiz Intelligence™. Schedule a demo and see how you can reach your 2022 goals when you have access to the right, reliable data.