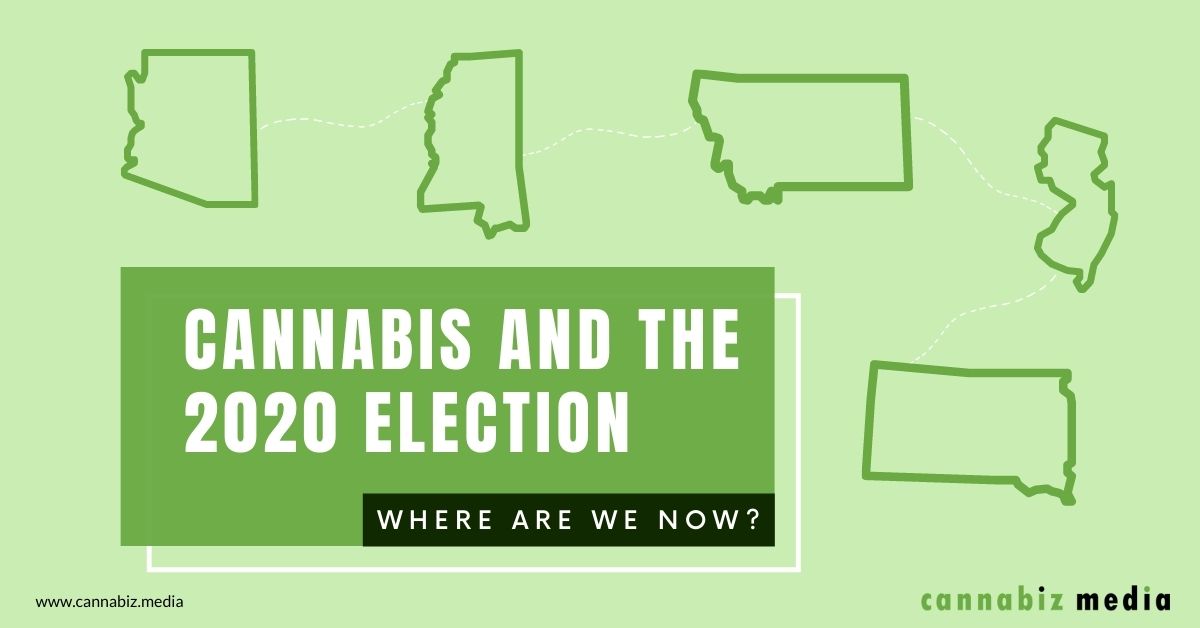 Cannabis and the 2020 Election – Where Are We Now?

After nearly 12 months, Arizona is the only state of the four that voted to legalize adult-use cannabis where sales have begun. New Jersey is mired in regulatory and application processing delays, while Montana legislators just passed a “workable” medical adult-use measure, and South Dakota continues to wait for a State Supreme Court ruling on a lawsuit claiming its legalization law is illegal.

Let’s take a closer look at each of these states to see what residents voted on in November 2020, how things looked three months after the election, and how they look today.

In April 2021, the state awarded an additional 13 adult-use licenses in a lottery that included 400 applicants. These licenses provided additional access to consumers in eight rural counties. Another 26 adult-use retail licenses will be awarded to social equity applicants in early 2022.

Therefore, it was up to the Mississippi legislature to pass a bill launching the program in the state. Unfortunately, lawmakers and Gov. Tate Reeves have yet to agree on that legislation, and a special session to legalize medical marijuana keeps getting delayed.

Montana Gov. Greg Gianforte signed House Bill 701 on May 19, 2021, which legalized adult-use cannabis sales in what industry insiders consider a watered-down version that doesn’t match what residents voted for in Initiative 190 on November 3, 2020.

For example, the signed law included a delay in the sales start date to January 1, 2022, a 35% THC potency cap for adult-use flower, an 18-month head start for existing medical cannabis license holders compared to new license applicants, and a reduction in home-grow allowances from four to two plants per individual.

In addition, oversight and the rulemaking process are being handled by the Department of Revenue. The new adult-use program will also allow horizontal operations rather than requiring vertical integration as had been the case under the state’s medical cannabis program.

New Jersey residents voted to legalize adult-use cannabis in the Garden State on November 3, 2020, and lawmakers approved legislation to regulate and launch the adult-use market on December 17, 2020. It took another two months until Gov. Phil Murphy signed the law on February 22, 2021.

The first set of rules wasn’t released until August 19, 2021. These rules favor local entrepreneurs rather than the multi-state operators that hold most of the state’s existing medical cannabis licenses. The law also allows 37 new cultivators (to be licensed before February 2023) and an unlimited number of manufacturing, wholesale, distribution, retail, and delivery licenses. In addition, microbusinesses will not count toward license limits, and social equity applicants will be prioritized in the licensing process.

Keep in mind, these rules represent the regulations required for the August 2021 rules deadline established in the law signed by Gov. Murphy. They are not the complete or final rules, so changes could still be made.

The next deadline that the state’s Cannabis Regulatory Commission was required to meet per the law was September 18, 2021. This was the date when the commission should have started accepting new cannabis business license applications, but regulators missed that deadline.

The law also states that within 12 months from the law’s signing, the commission must pick the date when legal sales will begin. With the deadline to accept license applications missed, a February 2022 sales launch date is unlikely. Instead, sales are more likely to start in the spring of 2022, but the date has yet to be set.

Residents voted in favor of Initiated Measure 26, which legalized medical cannabis, and Amendment A, which legalized adult-use cannabis, in the November 2020 election. Nearly one year later, neither program has been launched yet.

The adult-use market was challenged in court by opponents backed by Gov. Kristi Noem, and a circuit court judge appointed by Gov. Noem ruled that the voter-approved amendment was unconstitutional. The South Dakota Supreme Court has yet to rule on the matter.

In the meantime, the state legislature’s subcommittee on adult-use cannabis decided to move forward on legalization on October 19, 2021. Next, the full marijuana study subcommittee needs to decide whether or not the proposed bill should proceed. If so, they would need to get approval from the Legislature’s executive board for the legislation to be introduced in the 2022 session.

Once the bill gets into the 2022 legislative session, it would need to go through standard committee action and eventually, may be put to a vote in the state’s House of Representatives and Senate. Keep in mind, Gov. Noem is against legalization of adult-use cannabis and is likely to veto such legislation. The only way to override her veto is to get a two-thirds majority vote in both the House and Senate.

It’s not surprising that signatures are already being collected to put another initiated measure legalizing adult-use cannabis on the 2022 general election ballot. This one would be a state law if it passes rather than a change to the state’s constitution, which is the issue the circuit court judge ruled against.

In terms of the state’s medical cannabis program, the law passed by voters in November 2020 says that rules must be enacted by October 29, 2021, and the South Dakota Department of Health must start issuing medical ID cards by November 18, 2021. The problem is proposed legislation doesn’t match what residents voted for when they supported Initiated Measure 26.

While things moved quickly in Arizona, adult-use cannabis programs are much slower to launch in New Jersey. Montana is inching closer to creating an adult-use program, and South Dakota is barely hanging on. On the medical side, South Dakota is doing a bit better and Mississippi will get there eventually. For now, patience is the name of the game.

Want to keep track of all the new licenses coming to these states and across the U.S., Canada, and international markets? Schedule a demo of the Cannabiz Media License Database!