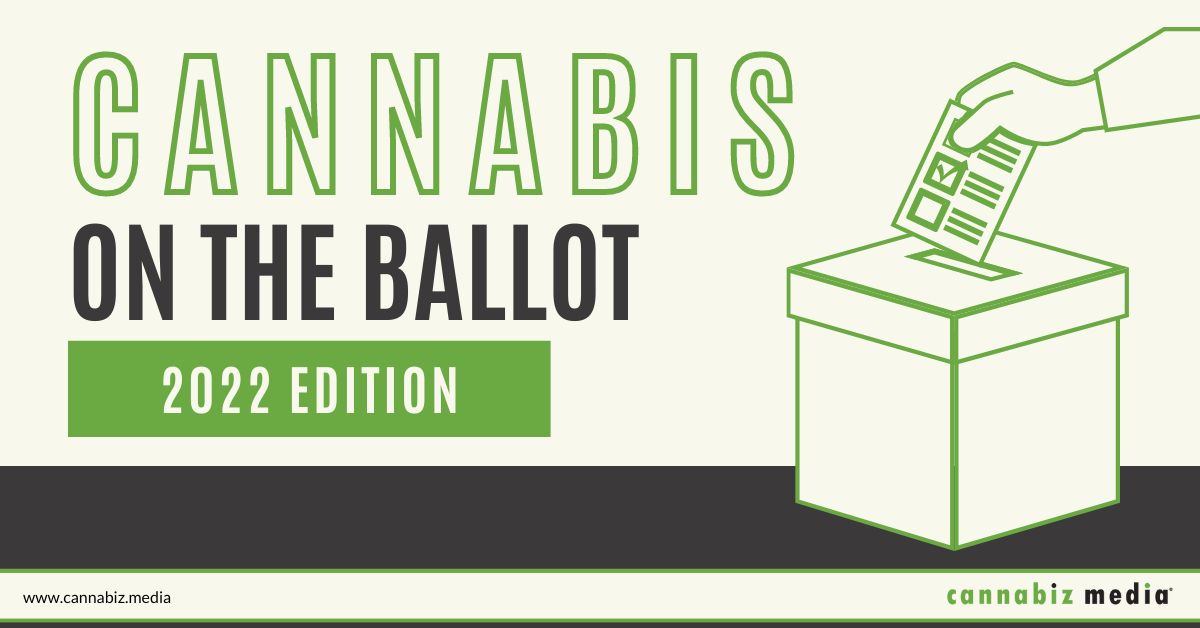 Cannabis on the Ballot: 2022 Edition

The national midterm election is coming up in just a few weeks with a variety of major races on the map. Control of Congress, nearly every state legislature, and numerous governor’s offices are on the ballot above a variety of other hotly contested races. Voters in some states will see ballot questions — an opportunity to decide the fate of proposed initiatives or constitutional amendments, five of which nationwide, could have impacts on the cannabis industry. This week’s blog will review five proposals on the ballot and their implications for the industry and licensing.

A few of these ballot measures will impact the future of the cannabis industry. Unlike in previous years (including 2016, 2018, and 2020), this year’s cannabis legalization ballot measures are all adult-use in nature. These proposals would all be expanding existing medical cannabis markets.

In previous election years, the cannabis industry faced opportunities for both adult-use and medical market establishment. Instead, numerous states could be facing down the same path of regulatory and licensing expansion and continued opportunities for already operational businesses. Let’s take a look at the approved ballot proposals for Arkansas, Maryland, Missouri, North Dakota, and South Dakota.

Responsible Growth Arkansas launched a campaign now known on the ballot as Issue 4. This constitutional amendment would amend and repeal parts of the state’s medical cannabis Amendment 98. Notably, if approved, the amendment would modify the number of cultivation and manufacturing licenses available — raising the cap from eight to 20.

Also, another lottery would be held to award 40 more licenses, tripling the retail footprint statewide. Legacy medical business owners would be licensed for adult-use operations by March 7, 2023.

Additional non-medical licenses (12 cultivation/manufacturing and 40 retail) will be distributed in two lotteries with a July 5, 2023 deadline.

Unlike the other cannabis proposals nationwide, Question 4 was proposed and placed on the ballot by the Maryland legislature. Reminiscent of New Jersey’s Question 1 from 2020, voters have the opportunity to direct the legislature to do the heavy lifting and pass further legalization bills into law.

Lawmakers will need to deliberate on a regulatory framework: including early adult-use sales in medical dispensaries, a licensing timeline, social equity, tax rates, and more. Upon approval, medical cannabis licensees are expected to be the earliest participants in the state’s expanded industry.

The state legislature has already laid the groundwork for legalization with the passage of House Bill 837. The bill’s effectiveness is contingent on the passage of Question 4, establishing further decriminalization during a period from January 1 through June 30, prior to Question 4’s July 1 effective date.

Supporters of the “Yes on 4” campaign have filed campaign finance reports showing limited spending, and the opposition hasn’t filed any such report. According to the Maryland State Board of Elections, license holders among the donors include SunMed, Trulieve, and Green Thumb Industries.

A recent Washington Post-University of Maryland poll shows support at over 70%, suggesting the amendment’s passage is imminent, but the winter General Assembly session will be the real fight as a variety of interests provide input on the details.

Missouri’s Amendment 3 would impact the state’s cannabis industry by overhauling the previously-approved medical cannabis ballot measure, Amendment 2 of 2018. The number of licenses available statewide would essentially double — by making the same number of adult-use licenses available — medical licensees would become “comprehensive” or dual-licensed.

This would occur by early February, 2023 and non-medical businesses would be shut out until late 2024 — with one exception. As a social equity provision, the amendment’s authors included language to establish a microbusiness licensing program. On top of expanding medical cannabis licensing to adult-use, 144 additional microbusiness licenses would be established, divided among the state’s congressional districts. These will be distributed by a lottery, and some licenses would include wholesale, while others would be licensed to include retail.

The proposal’s five largest donors include numerous multi-state operators (MSOs) and other license holders in the state, and their combined donations have surpassed $1.5 million.

(As a side note: in a recent Cannacurio podcast episode, I discussed microbusinesses with Cannabiz Media’s Ed Keating. We touched on the future of microbusiness licensing, and the relationship between legacy medical programs and social equity. Keep an eye out for proposals mirroring Missouri’s in future elections.)

Statutory Measure 2 was filed by New Approach North Dakota (also known as “Yes on 2”), whose supporters include both of the state’s cultivation and manufacturing licensees, as well as at least one registered dispensary. Currently, there are only two production licenses and eight dispensaries statewide.

If approved, adult-use legalization would increase the number of production (consolidated cultivation and manufacturing) licenses from two to seven and the number of dispensaries from eight to 18. If approved, a mandatory rule-making period would place licensing and sales on track for a late 2023 (Q3) rollout.

The group South Dakotans for Better Marijuana Laws is back for another go after a successful 2020 initiative (Constitutional Amendment A) was gutted by the state Supreme Court. The state is currently implementing a medical cannabis program, also approved by voters in 2020.

Initiated Measure 27 is broadly written, including possession and home grow provisions, but intentionally lacking any type of regulatory framework as a means to withstand future constitutional challenges. Under this proposal, personal home cultivation will only be permitted in jurisdictions lacking a retail store.

If approved, the legislature is expected to take up a bill to establish a regulatory framework — possibly modeled after the state’s medical cannabis licensing structure. If lawmakers pursue this option, licensing caps and/or adult-use opt-outs are likely to be features of a future recreational framework.

The two tables below tell a story of varied license expansion. If each ballot measure is approved, some states will see a bump in production licenses. Arkansas and North Dakota would see more than a doubling of the number of production licenses, while Missouri’s would stay the same, only allowing for existing license holders to convert to medical and adult-use.

On the retail side, Arkansas would triple from 40 stores to 120, although 80 of the locations would essentially be issued in pairs due to ownership rules. The change in market size may not be enough to warrant a significant increase in testing labs. Finally, Maryland and South Dakota’s markets will require legislative action prior to license issuance.

In recent years, social equity has been a consideration that has gained importance and weight in legislative and regulatory discussions. While most of these proposals lack social equity provisions, Missouri’s amendment leaves social equity as the only pathway to issuing licenses to new businesses, while Maryland’s enabling legislation will be nearly certain to include it. These developments may result in lawsuits in a few states, while others pursue a rigorous timeline to launch sales.

While some of these proposals are expected to see approval in a few weeks, conflicting political polling suggests that a few of these ballot measures may see close races in the home stretch. Upon voter approval and certification, a legislative phase will be required in some of these states, forcing the legislature to come to an agreement on market mechanics.

In 2020, New Jersey residents voted to legalize, but the legislature took nearly a year to come up with compromise legislation. This compares to Arizona, where residents were able to begin purchasing cannabis roughly two months after the passage of their legalization ballot measure.

Timelines to implementation vary. Most of the proposals do not take effect immediately, although a few may have effective dates in December after election certification is complete. Personal possession, and if applicable, home cultivation, are likely to begin on the effective date for each state.

Sales launches vary. Two states, Arkansas and Missouri, could see initial sales open up at existing dispensaries during Q1 of 2023, while North Dakota would be later in the year. All of these markets, paired with other recently legalized states on the East Coast, will make for a busy 2023 for the cannabis industry.