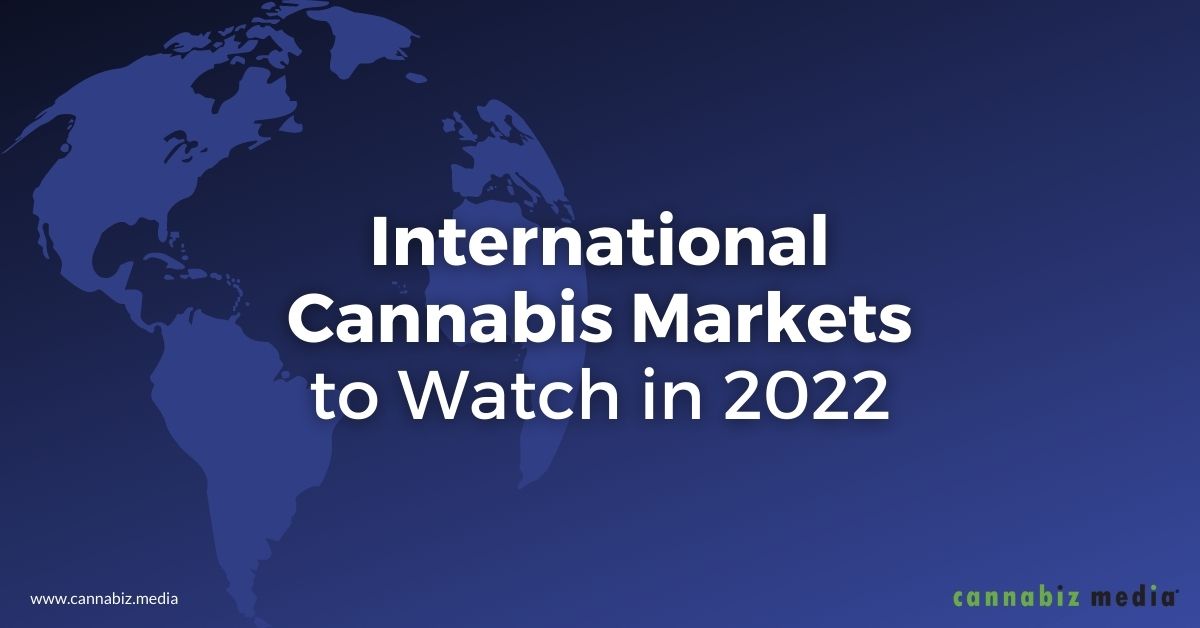 International Cannabis Markets to Watch in 2022

Progress is being made. International cannabis markets are expanding and adult-use legalization is getting closer in many countries, particularly in Europe. Let’s take a closer look at some of the big cannabis markets around the world – beyond the United States and Canada – to watch in 2022.

Europe: All Eyes (and Wallets) Are on Germany

Germany has a population of more than 80 million people. To put that into perspective, the adult-use cannabis market in Germany is likely to be a significantly larger than the legal adult-use market in California, which had an estimated six to seven million in-state adult-use customers in 2020 according to MJBizDaily’s 2021 Annual Marijuana Business Factbook.

But that’s not all. Germany also has a big tourism industry with 40 million tourists coming to the country every year – primarily from other European countries. That means when legal adult-use cannabis is available in Germany, tourism will likely increase as will recreational cannabis sales.

Today, Amsterdam in the Netherlands is the place tourists go in Europe to freely consume cannabis, but while authorities look the other way, cannabis is not legal for recreational use in the Netherlands. Legalization in Germany could change everything in Europe.

In December 2021, the Germany’s three political parties agreed to regulate recreational cannabis distribution and sales. It’s only a matter of time for adult-use cannabis sales to launch, and you can bet other European nations will follow soon after Germany.

Already, large Canadian and U.S. multi-state operators are staking claims in European cannabis markets, and investors are seizing opportunities to get an early foothold in what could quickly become a large market. For example, Tilray Brands completed its first medical cannabis sale in Malta in January 2022, and in February 2022, Casa Verde Capital invested $15 million in Cansativa Group, a company trying to become the Amazon of cannabis for Europe.

There are advancements being made in Central America and South America that will help countries legalize cannabis and open markets wider than ever. For example, in July 2021, Colombia authorized exports of dried cannabis flower. Panama legalized medical cannabis in August 2021, and Mexico published rules to regulate its medical cannabis market in January 2022.

Mexico and Colombia are two countries to watch. Mexico’s population is approximately 130 million making it the largest potential legal cannabis market in Central America and a big opportunity for cannabis markets. Colombia is one to watch for a different reason – growing and exporting dried flower.

At the same time, some countries in this region of the world are still facing obstacles to legalization of medical and/or adult-use cannabis. Costa Rica’s medical cannabis law was passed by its Legislative Assembly in January 2022, but later that month, the country’s president vetoed the bill claiming it required changes to limit personal cultivation and consumption. The bill will go back to Congress, which Reuters reports is “dominated by opposition parties.” Its future is unknown.

Despite challenges in some countries, Central America and South America have many fast-growing cannabis markets offering significant business and investment opportunities that could come to fruition in the near future.

One of the more interesting stories coming out of Africa in the past 12 months was about Zimbabwe, which licensed 57 foreign and local entities to grow and process medicinal cannabis in September 2021. The country legalized medical cannabis in 2018. Why grant these 57 licenses? Exports. Zimbabwe is eyeing cannabis exports, and entities from Germany, Canada, Switzerland, and more are already jumping in.

Things look quite different in Southeast Asia, a part of the world known for its strict drug laws and punishments. Still, progress is being made. For example, Thailand legalized medical marijuana in 2018, and in 2020, the government decriminalized the production and use of medical cannabis except for flower and seeds. It wasn’t until January 2022 that the country took a step closer to full decriminalization when the Narcotics Control Board approved fully dropping cannabis from the ministry’s list of controlled drugs. The legislation was signed by the Health Minister on February 8, 2022. After being published in the country’s public newspaper of record for 120 days, the measure will go into effect and cannabis will be fully delisted (including flower and seeds) and decriminalized in Thailand – a huge step for a country in Southeast Asia.

While it’s unlikely that other countries in Southeast Asia will follow Thailand’s example in the near future, that doesn’t lessen the importance of what Thailand has done – opened the door for market growth.

Each year, we see more cannabis markets opening and expanding around the world. This trend will continue to grow in 2022, and Cannabiz Media will be tracking all of the license activity in the Cannabiz Media License Database. Schedule a demo and see how you can use it to reach your business goals this year.