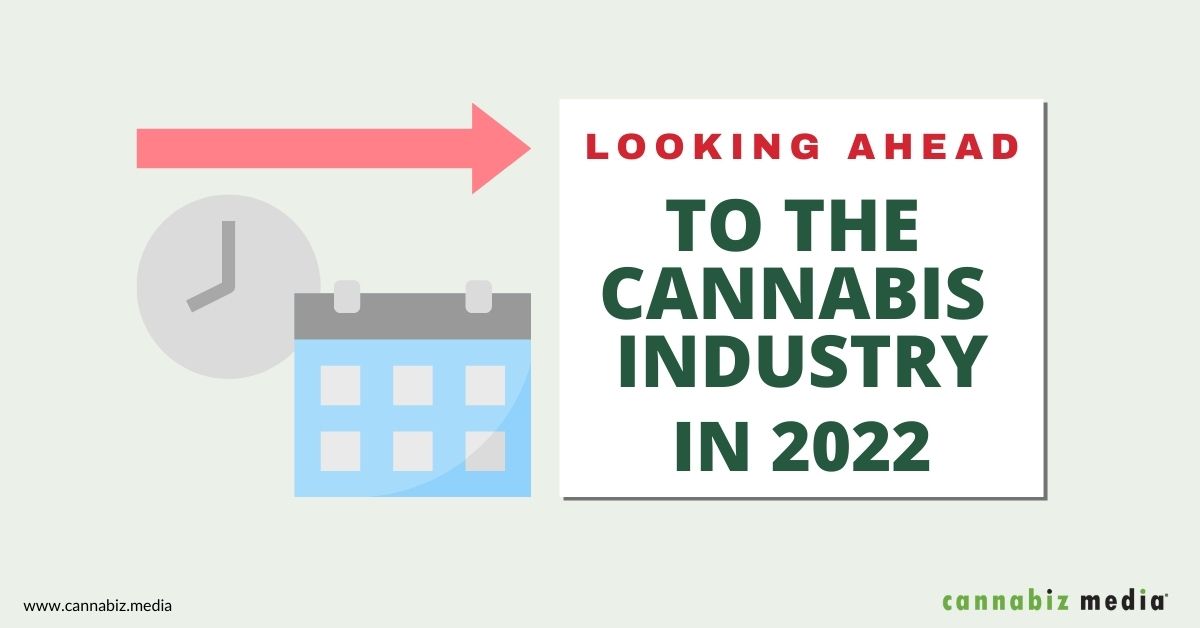 Looking Ahead to the Cannabis Industry in 2022

In December 2020, I wrote an article on the Cannabiz Media blog that looked ahead at the cannabis industry in 2021. Twelve months have passed, and we’ve seen progress in many of the predicted trends that ended up dominating news and conversations throughout 2021, including federal decriminalization, expanded legalization, acquisitions and consolidation, and more. At the same time, 2021 brought more of the same to the cannabis industry – the “hurry up and wait” environment that has become the industry’s norm.

As the final days of 2021 tick by, let’s take a look at some of the trends and expectations that people working in and with the legal cannabis industry see coming in 2022.

What happens when growing problems related to illegal markets, excessive taxation, and restrictive regulations reach a breaking point – the point where legal cannabis businesses can no longer afford to keep their doors open? As 2021 comes to a close, we’re getting close to finding out the answer to that question in states like California and Oregon.

In a state where excessive taxes cause cannabis prices to be 50% higher (or more) than black market prices, it’s not surprising that an estimated 66%-75% of cannabis sales go to illegal operations. Change is definitely needed, and hopefully, some of those changes will come in 2022.

Some steps are being made to help. The Oregon legislature dedicated $25 million in December 2021 to help law enforcement crack down on illicit operators in the coming year. Also, the governor signed SB408 (it goes into effect on January 1, 2022), which will help update existing regulations and solve some problems with the state’s cannabis industry. However, there is a lot more that needs to be done to make regulations less restrictive and ease tax burdens placed on legal operators so they can effectively compete against the black market.

Mergers and acquisitions show no signs of slowing down in 2022, and big MSOs are gaining more power and market dominance every day. As a result, it’s getting harder and harder for smaller operators across the supply chain to stay in business.

Expect to see MSOs continue to make strategic acquisitions throughout the coming year to gain bigger footholds in states with cannabis programs that have yet to open for sales (particularly states with large market potential like New York and New Jersey) and in states where adult-use legalization is likely to happen in the not-so-distant future (like Pennsylvania).

The question everyone wants an answer to is when cannabis will be legalized at the federal level, but it’s unlikely that we’ll get an answer to that question in 2022 based on what’s been happening in late 2021 related to cannabis legislation, particularly the removal of the SAFE Banking Act from the National Defense Authorization Act.

Furthermore, the success that some politically-led efforts have had in stopping voter-approved cannabis legalization initiatives (medical and adult-use) in states like South Dakota and Mississippi shows the partisan divide is far from closing. In fact, it could get worse before it gets better. As long as the divide is big enough and as long as government-led efforts to avoid turning votes into laws continue to succeed, federal legalization won’t happen.

We’re already seeing innovative technologies in the cannabis market, including novel forms to deliver cannabis to patients and consumers in consistent dosages with fast-acting effects. In addition, a growing interest in the uses for and effects of lesser-known cannabinoids and terpenes offers new opportunities to create innovative products. Bottom-line, to win in the cannabis markets of the future, companies must stand out, and research and development is a critical piece of the puzzle.

Consumption and microbusiness licenses became hot topics during 2021, and this will continue in 2022. While COVID-19 and widespread quarantines brought consumption licenses to a grinding halt in 2020 and 2021, the world is opening back up as we head into 2022. As a result, consumption licenses are gaining traction again.

As Cannabiz Media’s co-founder and chief data officer, Ed Keating, told MJBizDaily earlier this month, more states will launch microbusiness programs in the future and the rules for these programs will continue to evolve based on what is and isn’t working in other states.

Key Takeaways about the Cannabis Industry in 2022

In 2020 and 2021, COVID-19 made cannabis an essential business, but as the world recovers from the pandemic and life returns to a new normal, what’s next for the cannabis industry? As we head into 2022, continued growth is expected, but there are still obstacles to overcome and questions that need to be answered. One thing you can count on throughout the uncertainty is that Cannabiz Media will be tracking all of the licensing and intelligence data along the way.

To keep track of all cannabis licensing data and connect with legal operators to grow your business in 2022 and beyond, subscribe to the Cannabiz Media License Database. And to track cannabis industry mergers, acquisitions, and more, subscribe to Cannabiz Intelligence™. Schedule a demo to get started.