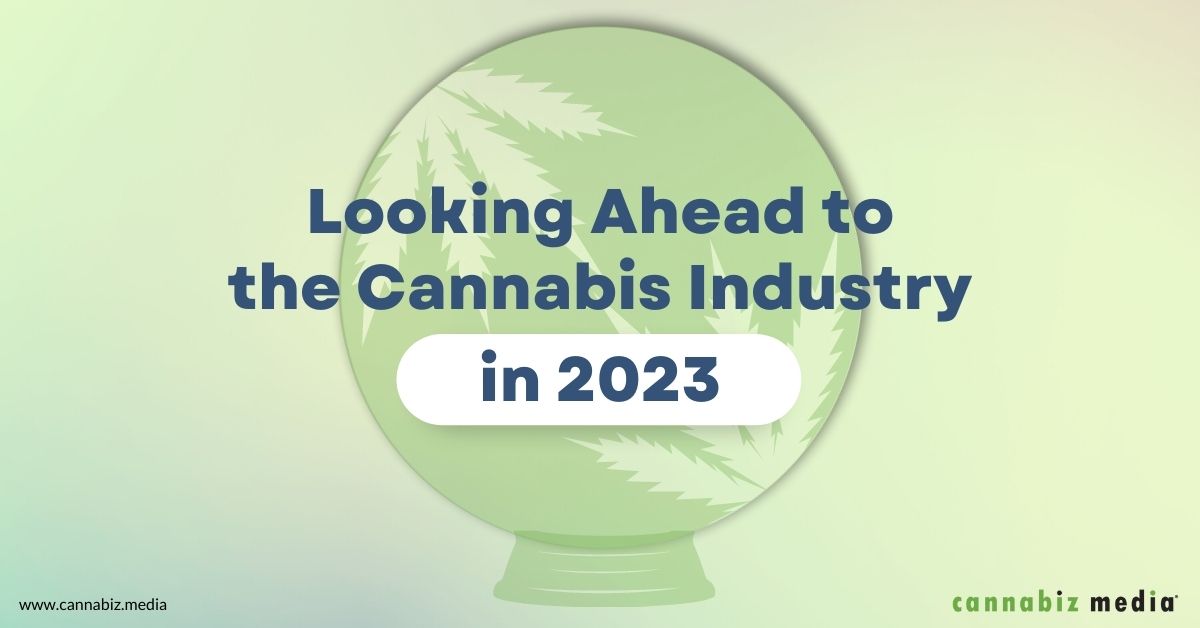 Looking Ahead to the Cannabis Industry in 2023

Last week, I wrote an article for the Cannabiz Media blog that recapped the 2022 cannabis industry, and now, it’s time to look ahead to 2023. We can all agree that 2022 was a challenging year for the cannabis industry, and a possible recession, falling cannabis prices, oversupply, and other problems will continue in the coming months. However, this is a resilient industry that’s not going away anytime soon.

With that said, let’s take a look at what we’re likely to see happen in the cannabis industry during 2023, so everyone working in and with the industry can prepare and weather the storm.

1. The Ongoing Wait for Movement on Banking and Legalization

Any article about the future of the cannabis industry would be incomplete without a discussion on banking and federal legalization. In 2022, there was greater hope than ever that some form of the SAFE Banking Act would be passed. Last week, Senate Majority Leader Chuck Schumer was making a “last ditch effort” to include cannabis banking reform on the omnibus appropriations legislation during the lame duck session.

Unfortunately, many Republicans in Congress are still adamantly against cannabis industry banking reform. It seems unlikely that Schumer will be successful this year, but the topic will still be on the table in 2023. With bipartisan lawmakers urging President Biden to back federal legalization as part of his administration’s scheduling review, 2023 just might be the year we see quantifiable steps taken on both banking problems and legalization.

The United States is facing a possible recession in 2023, and the economy will continue to do struggle. At the same time, cannabis prices have been dropping throughout 2022 with oversupply and illicit market issues expected to continue in 2023. As a result, you can expect to see mergers and acquisitions continue and even happen more frequently in the next 12 months.

While we may not see as many large-scale mergers or acquisitions in 2023, there will be many opportunities for small and mid-sized cannabis operations to be acquired by larger players. Again, problems with the economy, supply, and pricing won’t end in the near-term. As a result, many license holders will want to exit the market, creating opportunities for acquisitions that can give single-state operators (SSOs) the ability to expand their footprints and multistate operators (MSOs) the ability to enter new markets.

Cannabiz Media has tracked and researched the details on over 500 M&A transactions in the cannabis, hemp, and ancillary space through Cannabiz Intelligence™ (available in the Cannabiz Media License Database), and that number will certainly increase in 2023.

Brightfield Group released a report on the Delta-8 threat to the cannabis industry recently, and the data shows that Delta-8 products are already stealing market share from the CBD market with 35% of CBD consumers saying they’ve purchased some kind of psychoactive hemp-derived product in the past six months.

According to Headset’s November 2022 report on cannabis beverages, the U.S. cannabis product category market share breakdown is as follows:

As younger consumers enter the legal cannabis market and adult-use sales open in more states, market share will continue to shift. For example, as Headset’s researchers explain in the category trend reports released throughout 2022, younger consumers spend more on vapor pens than flower. Men are more likely to purchase flower than women, and women are much more likely to purchase topicals than men. Evolving consumer preferences will determine future cannabis product sales, and brands must pay close attention to these trends in 2023 and beyond.

5. Growth in Microbusiness and Consumption Licenses

The expected increase in microbusiness and consumption licenses in the United States was one of the trends included in Cannabiz Media’s 2022 cannabis industry trend predictions, and it’s included in the 2023 list as well – albeit with an expanded focus.

On Episode #44 of Cannabiz Media’s Cannacurio Podcast, Jason Kikel, Director of Regulatory Research for Cannabiz Media, shared some insights into the future of microbusiness licenses in the United States:

“I think looking forward six months to a year, maybe beyond that, New York is going to be a state [to watch]. The microbusiness license is already on the books. In the short term, their cannabis commission is working through the early start adult-use cultivators, but beyond those early adult-use start licenses, there is a pretty decent opportunity for a lot of smaller mom-and-pop operators in New York.

“Beyond that, I think there is a decent chance for microbusiness licenses to act as a counterweight against some of the larger MSO dominated states, but through the lens of bringing smaller operators in. The national conversation and politics around social equity are really going to guide this.

“[Regulators] might have an opportunity to allow for either a high number or an unlimited number of microbusinesses to enter into markets that are already largely dominated by big players. I think they could find a way to make that work in some of these states, and they might surprise us.”

And in Episode #46 of the Cannacurio Podcast, Jason shared what he expects to happen in the future for consumption licenses:

Nevada will probably emerge as the national [consumption license] leader. They’re quickly going to eclipse some of the other markets, and some of the other states. Las Vegas will probably be at the heart of that. There will be interactive shows, other activities to do, not just a room with a dirty bong sitting on a table. It's going to be much, much more. They’ll have a ‘Vegas experience’ at some of those lounges.

“Beyond Nevada, Illinois is setting the groundwork for a great regulatory environment. Chicago could emerge as a leader nationally. California, despite all of their challenges and trouble in the past five years, is also allowing for local governments to emerge and innovate in lounges. So while Los Angeles has not permitted lounges and consumption spaces yet, their smaller neighbor, West Hollywood, has already emerged with individual restaurants, onsite consumption with restaurants, and pretty advanced menus with edible and infused items on the menu.

“Looking on the East coast, New York will probably mimic Las Vegas and pick up pretty quickly. And there might be some other surprises in there as well. Denver could always pick up and become a key player in this as well.

“I think that consumers are going to start to speak up and say, ‘Hey, we'd love to see this in our town or in our state.’ And patient advocates still have a lot of value in the conversation. This is still a social equity issue as well.

“So I think that 10 years from now, at least 25 to 30 states will probably have some type of presence. Some of the states might say, ‘You know what? We don't want to deal with this, but counties, cities, if you want to take this on, that's for you.’ And allowing the cities to make that decision will probably be the way that the majority of states go. And there will always be some states that likely won't allow lounges.”

While it will take time for microbusiness and consumption licenses to reach the points Jason predicts for the future, we’ll definitely see these types of licenses become more common and more popular in 2023.

As we head into 2023, the cannabis industry is poised to experience its version of the dot-com bubble burst of 2000. After years of fast growth, the industry faces a reset. A global pandemic wasn’t the pin prick that would burst the bubble, but the struggling economy may be. The good news is the industry will survive. We just have to navigate through 2023 first.

Cannabiz Media will be tracking all of the licensing and business intelligence data in the Cannabiz Media License Database. Schedule a demo to see how you can use it to grow your business in 2023 and beyond.